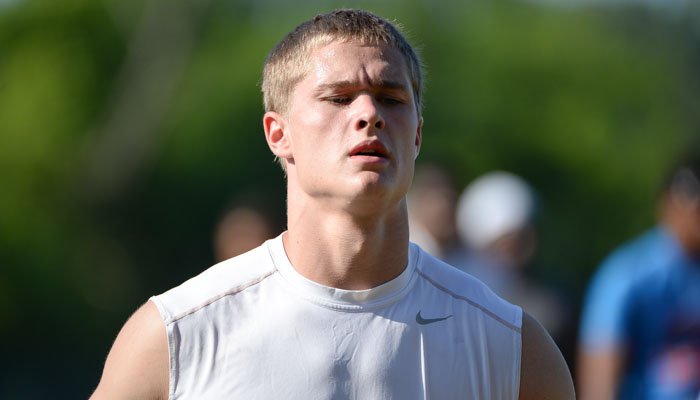 LB commit Chad Smith has already had a strong showing at Nike's The Opening.

View Full Profile set out to prove that he belonged at Nike’s The Opening, and he has done just that after day one.

The 4-star 2015 Clemson linebacker commit out of Sterling (VA) Dominion received an invite to the prestigious event which will be held this week at Nike’s world headquarters in Beaverton, Oregon. The Opening is the premier summer showcase event for high school recruits, and invites are handed out to the top 162 high school football players in the nation as selected by Student Sports after film evaluation and/or in-person evaluation at one of Nike’s nationwide events such as the Nike Football Training Camps (NFTC).

The first day of competition at The Opening consisted of SPARQ testing and the SPARQ Championship, which aired Tuesday night on ESPNU.

According to Nike’s website, SPARQ testing accounts for a player’s speed, agility, power and explosiveness and a score of 130 or higher puts athletes in an elite category. After Tuesday’s showing, Smith can now count himself as one of the elite athletes in the 2015 recruiting cycle.

“The first couple of days have gone great, actually,” Smith told TigerNet Tuesday night. “The first event that we did was the SPARQ testing for everybody. The SPARQ testing is the 40, the shuttle, vertical and powerball drill. I got my scores from that and I scored a 140.97 and that was enough to get me in the Top-10 for the SPARQ Championship that was on national television on ESPNU. I participated in that and came in fourth place.”

Earlier in the week, Smith told TigerNet that he wanted to prove that his name deserved to be mentioned among the elite athletes and he said that he believes he’s done just that.

Smith said that knowing that everyone at The Opening is an elite talent means that there is a mutual respect between all of the participants.

“We have that mutual respect at The Opening,” he said. “We all know that we got selected for a reason and we are representing some of the best high school athletes in America. To be mentioned with that is just humbling and it's an honor. I'm really excited.”

One of the highlights for Smith so far has been seeing what the Nike World Headquarters has to offer.

“The headquarters is ridiculous,” Smith said. “The stuff they've got here, it's crazy. It's the best of the best gear over here and the best place to be. In regards to the coaching over here, once again Nike provides the best - the best gear, the best facilities, the best coaches. The advice they give is second to none.”

Wednesday, Smith and his Land Sharks team begins 7-on-7 pool play and TigerNet will catch up with him to see how his team his doing. Smith is joined on the Land Sharks by Clemson target Austin Bryant

IMA BE ON TV TONIGHT FOR THE SPARQ CHAMPIONSHIP!!!! pic.twitter.com/4ECC22JkFq

Damn this is too good lol The Honey Badger too! pic.twitter.com/GxgbcH1Tnm