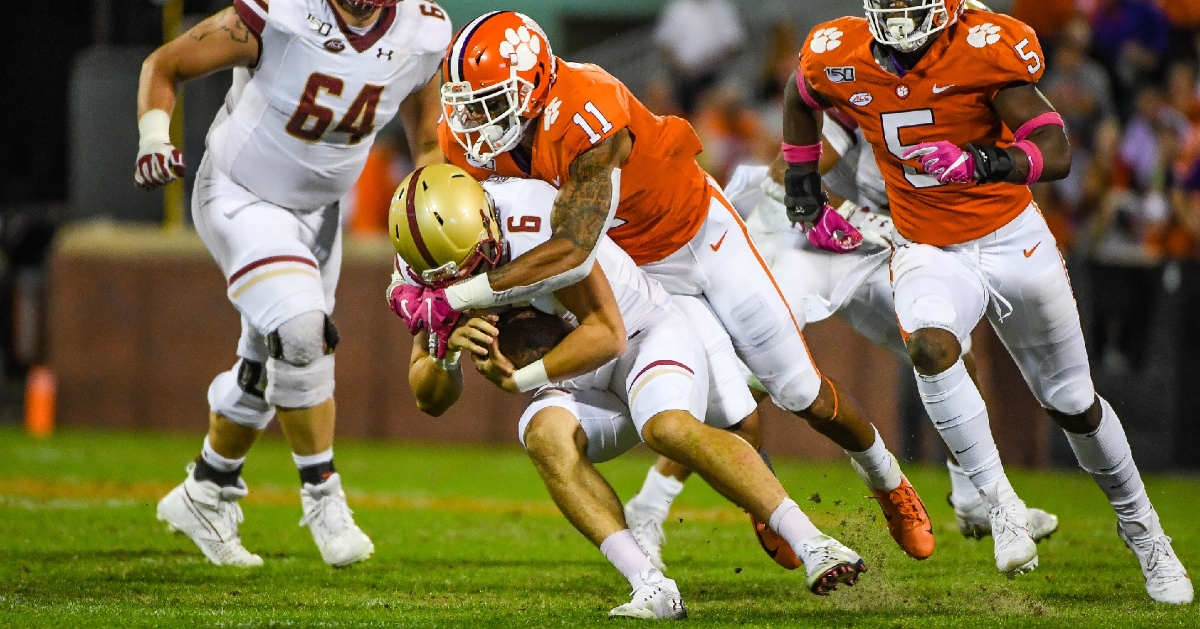 Isaiah SImmons lowers the boom on the BC quarterback.

CLEMSON – Boston College head coach Steve Addazio held one of the most matter-of-fact press conferences following the loss to Clemson Saturday night, and one of his takeaways is that the Tigers are “a monster.”

Clemson defeated Boston College 59-7 in Death Valley, and have lost nine in a row to the Tigers in the series. Saturday’s loss was the most lopsided in the series, but Addazio wasn’t mad or irate – he was simply realistic.

“I can take away that Clemson played at a very, very high level,” Addazio said. “I thought they made every play they could possibly make. More credit to them. They played like the No. 1 team in the country. They played like the team that went after Alabama in the national championship. That's what happened out there tonight.

“Obviously Clemson played a hell of a game tonight. They’ve won 23 straight games. They’ve shown that they’re an elite team in America. I thought they played at a high-level tonight. I feel like we ran into a buzzsaw. [I’m] disappointed that we weren’t able to play better than we did. And quite frankly, right now my mindset is we’ve got to go get ready to play Syracuse. We’ve got a big game coming right around the corner. We’ve got a late night, and we’ve got to get right to work and get ready for the ‘Cuse.”

Boston College put together a long scoring drive that made it 17-7 midway through the first half but failed to post another scoring threat the rest of the night against what he calls a monster.

“I thought we put together a pretty good drive there in the first quarter that went for a touchdown,” Addazio said. “I felt good about that drive. It got away from us really quick. Sometimes when that happens, you feel like you have to take bigger chunks. That happened a little bit. It brings you out of your run game just a little bit. It gets you out of your flow. Listen to me now, this team has won 23 straight games in a row. They beat a lot of teams. This is a monster, especially here at home in a Saturday night game like this.”

The Tigers have fallen in the polls in recent weeks despite dominating wins, something Addazio can’t fathom.

He was then asked how he thought his team would be able to bounce back, and he smiled and said his players understand what they saw Saturday night.

“They’ll respond great. I’m just saying that flippantly. I know what they’re like,” Addazio said. “These are bright guys. They get it. They’re disappointed in [the locker room] right now. They understand that they could’ve played better than we did and should’ve played better than we did, but [they] also understand what just went on out there on that field. They’ll get ready to go play Syracuse. They will not stutter a step.”