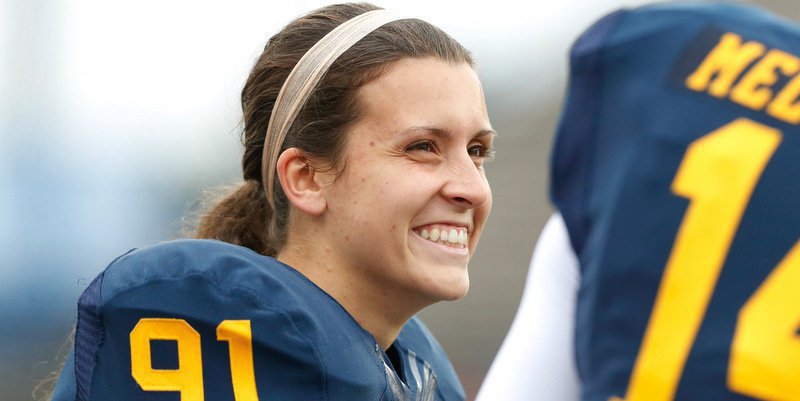 Doss smiles during a game in 2015 (Photo by Aaron Doster, USAT)

CLEMSON – April Goss admits she will have conflicting emotions when Kent St. and Clemson kick off the season Saturday at noon in Death Valley, but in the end, four years of blood, sweat, and tears will win out.

The former Kent State kicker became just the second woman to score in a NCAA football game when she nailed an extra point against Delaware State in the midst of a torrential downpour in 2015. Now Goss is impacting baseball, track, soccer and tennis student athletes at Clemson as a mental health counseling graduate student and graduate assistant in academic service in Vickery Hall.

This Saturday, Goss will spend her birthday on the Kent St. sidelines, watching her current school and former school do battle, all while fondly remembering her days donning a helmet and shoulder pads.

The Pittsburgh native didn’t always dream of playing football but when it was apparent soccer wasn’t fulfilling her competitive nature, she went to her dad with the idea and from there came the dream of playing Division I football.

“I played soccer growing up until my sophomore year and I always thought I wanted to play (football) in high school but I was never serious about it. After my sophomore year playing soccer, I knew I needed to do something different,” Goss told TigerNet in an interview earlier this week. “For me, I'm not a quitter, so I knew I need to do something else other than soccer and I really started thinking about playing football. I realized that kicking a football is something I could potentially do and I asked my dad. He told me no multiple times and then eventually and was like, 'Ok, Let's go!' I started out in my front yard kicking and I wasn't very good, I wanted to keep doing it because if I was going to play I was going to commit everything to it. There wasn't going to be anything on the side and even when I was running track it was to complement my kicking career. I played for two years - my junior and senior year in high school - and after I knew I didn't want to be done.

“After my senior season, I took two weeks off and got right back into it. I started researching schools and I knew I wanted to go to a Division I school because I wanted to play for a Division I program and the idea of going to a big school was appealing to me. I looked at Pitt and West Virginia. Pitt didn't have my program and I didn't want to live in a city. I looked at West Virginia and I just didn't think I would like it there. I didn't know anything about Kent State except that James Harrison went there because I'm a huge (Pittsburgh) Steelers fan. I knew I was supposed to be there when I visited. I visited in December and they were in the middle of one of the worst winters I've ever had. I went back in March and there was still snow on the ground. I knew I was going to Kent State.”

Goss spent four years as a walk-on for the Golden Flashes, and she said during those four years, she learned a lot about her coaches, teammates and herself.

“I started researching how to walk on to a football team, and I could only find one article,” Goss said. “I immediately started looking up the process because I didn't know anything and I had no one to ask. Once I was accepted, I reached out to the football office about trying out in the spring. They wanted me to come in and introduce myself, and Darrell Hazell was still there. I was filling out my paperwork when Coach Hazell walked by and introduced himself, and when he realized what I was doing, he asked me to come back to his office and talk. He was such a sweet man, and I owe him so much. My tryout was during spring ball in 2012 - March 27th. I had to go back for all of the spring practice, and after that, I found out I made the team.

“I was very nervous going in. I did not know what to expect. Teammates in high school were fine. They were boys and immature, but that's expected. I was preparing for the worst, and that was mindset going in. At that point, I knew of Katie Hnida, and I read her story. I kept telling myself that it was an isolated incident and not an accurate portrayal of what all men who play college football are, but it stuck in my mind. I was preparing for them to be jerks, but they were so nice. I was almost like, 'What's going on?' There were over 100 players, and everyone knew who I was, but I didn't know anybody besides my position group.”

However, nothing could prepare her for the moment when she would finally get an opportunity at history.

“Four years went into that. When Coach Hazell was there for my first year on the team, he wanted to get me in a game. There were moments that it was really close and he kept telling me that if we got up by three scores that he was putting me in,” she said. “There were at least two times that it almost happened. When he left to go to Purdue, I knew there was no way that another coach was going to come in and be accepting of me and take me seriously. When Coach (Paul) Haynes came in, he met with all of the players and when he met with me he told me he wanted to put me in a game. The fact that two people believed in me that much that they were willing to do something that I didn't deserve. It was just a lot of waiting and there wasn't a lot of hope. I knew I had to be okay that it might not happen and I had to make sure that if it didn't that I could still feel proud of it. I knew that at the end of the day if we won the game, that's all I cared about.

“When I saw Delaware State on the schedule, I didn't want to put them down, but I put an asterisk by it to be prepared. Preparing for games, I knew I was never going to play so I was always relaxed and supportive of my teammates. That game, I was like, 'Oh crap, this could be it.' I was so nervous. I kept telling myself I wasn't ready. Our punter Anthony Melchiori was like, 'You're going to be fine, it's just a kick.' It was pouring down rain that game, water going between my shoulder pads. My shoes weighed five extra pounds. I remember someone coming over and telling me to get ready. It was the second quarter. I remember the coach talked to Shane Hynes - our starting kicker - and said he was going to call a timeout to take him out. When it happened, I got in the huddle with all of my linemen and my offensive coordinator - Shawn Clark, who is App. State now - told my offensive line, 'Listen, April is going to go in there and she is going to make history, so you guys all better freaking block for her and then you're going to put her on your shoulders and carry her off the field.' I just remember blacking out and I don't even remember the kick. I remember almost getting tackled by one of my teammates trying to pick me up. It was pretty awesome.”

After her eligibility ran out, Goss began looking for graduate school programs, and she found her next home in Clemson, South Carolina.

“I graduated in December of 2015, and at that point and time I changed my mind about by career,” she said. “I knew I was going to grad school, and I stumbled on clinical mental health counseling, and I had three requirements for graduate school - it was somewhere warm where it didn't snow, it had to have my program and it had to have a Division I athletic program because I knew I wanted to pursue counseling, but I also wanted to continue on in athletics in some capacity. Those were my requirements, and I found a list of schools and I went to my athletic department and was like, 'Tell me who you know here.' Eventually, I narrowed it down, and I got accepted to the graduate program, and I got a graduate assistant position.”

Still looking to incorporate athletics into her life, Goss accepted a position in athletics academic services, and there she’s able to help prepare current Clemson student athletes for tomorrow and their future after their respective sports.

“I realize I miss the competition and the competitiveness. Even when I went home to a practice, I miss being on the field,” she said. “I miss being in the action. I feel like within the role I'm in I'm able to give back and help that next group. I mainly do academics right now, so I'm helping them realize that they're more than just a student athlete. They're more than how they compete on the field and at the end of the day this is going to end. It will be a sad day when it happens, but what do you have to fall back on? What are you goals? Who are you? Right now, I have some returning students and some new one and I told them that I want to find out who you are and what makes you, you and make sure you're doing something outside of your schoolwork and your sport. I'm discovering who they are as a person and taking from what I've learned and hopefully working on that.”

Goss is also incorporating her studies into athletics as she tries to improve mental health in athletics.

“I came in having an idea and now I'm as confused as ever. I'm realizing there are so many different avenues and so many different options,” she said. “I'm passionate about mental health and how that can be incorporated into the athletic world. Through my program, I've been able to do a lot of projects that revolve around athletics. I did a project about treating depression in individuals who had traumatic brain injury. I talked to students about when they've had a concussion did they feel more anxious or depressed after. They usually say yes because they feel like they need to get back to their sport or classes. So, I know that these are areas we need to start working on.”

When Clemson and Kent State take the field on Saturday, the Blue and Gold of the Golden Flashes will win Goss’ heart, but she said he hopes to meet the Clemson football staff at some point in the near future.

“Not so much. I've been able to meet some people here and there, but I've been trying. I bug all of the academic coordinators. I keep telling them that I'd take the walk-on specialists because those are my people and that if they ever need a kicking coach, I'm free on Wednesday nights. I'm hoping that after this weekend I can maybe meet some people.”