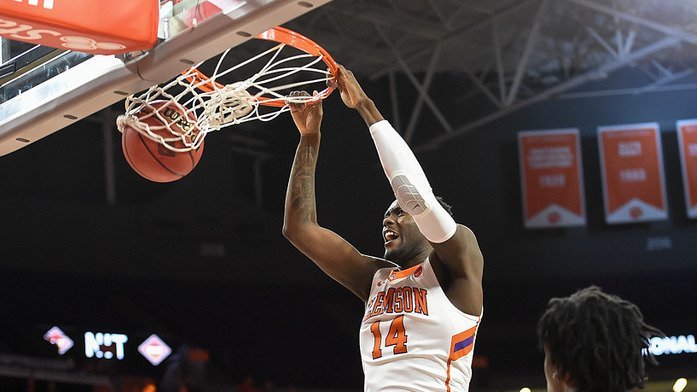 Eli Thomas is third on the team in scoring

CLEMSON – Eli Thomas and the Clemson Tigers are playing well, something that Thomas says began to build when the team took a trip to Spain over the summer.

Clemson (7-1) plays host to Samford (2-7) Saturday at 3 p.m. in Littlejohn Coliseum, a final tuneup before the Tigers face Florida and South Carolina over the next 10 days. The Tigers received five votes in this week’s AP Poll, and with a win will be off to the program’s best start since 2008-09 season.

Thomas says it is all about growth.

“I think it's just time and growth. Coach B (Brad Brownell) has just instilled into everybody inside the program that learning and growth mindset,” Thomas told TigerNet this week. “We've been practicing and playing with each other since Spain. Spain was a really good wake up call as far as our chemistry. We got to see the things we were good at and the things we needed to work on. Our coaching staff has done a really good job emphasizing our weaknesses to make them strengths. I think it's the growth mindset. We're growing as a team and getting better and better as a team. I think ultimately we're going to keep getting better and better as the season progresses.”

Thomas is third on the team, averaging 12.3 points per game, and leads the Tigers in blocked shots (20) and rebounds per game (8.5).

“I think I'm finally playing a full season. It's hard being on the scout team for half the season and then coming in and playing. Those guys were playing so well before it was my time play, so I was just trying to find my way inside of their chemistry,” Thomas said. “Even when we were practicing and I was on scout team, it's hard to get reps with those teams because those are guys that are playing and I'm not and I had to give them a really good look for the team we were getting ready to play.

“It was kind of hard on me, but Coach (Antonio) Dean has done a really good job of preparing me this year and I watch more film now with the coaches. Me and Coach B had a meeting last year at the end of the season that I wanted him to be harder on me. With him being harder on me, it enables to me to understand my mistakes, don't take it personally but just get better.”

One of head coach Brad Brownell’s mantra’s has also had an affect on the way Thomas plays.

“Being calm. I'm calm in all situations. I'm never too high and never too low,” he said. “Coach B has a saying - mental is to physical as four is to one. The saying basically means to stay calm throughout all aspects and all situations. Don't freak out when things don't go your way and just move on to the next play.”

The Tigers have been getting solid minutes from all of their big men, and Thomas said he is building chemistry with his frontcourt mates.

“Not even just Mark (Donnal). Me and Aamir (Simms). I haven't played in a game with Malik yet, but even him” I can't thank Coach Dean enough because we learn so much before practice, during practice, after practice. He spends so much time with us hands on to where we're practicing together and when it's two-on-two, we're learning so much about each other.”

Thomas is also taking on the responsibility of being more vocal out on the court.

“It's always good having your center being able to be vocal and lead the guys, especially when we're in zone. I have to tell everybody what's coming, where they're going and who's doing this and that,” he said. “To be able to do that then, but also to be a full-time vocal person and some sort of a leader to the team, I think it helps our team out a lot. The young guys are really helping me out a lot. My freshman year, I didn't really have anyone as a leader because it was so competitive for starting spots. Here, I'm able to help those guys how I really wanted to be helped my freshman year.”

“I take pride in it. That's why I get so upset when I turn the ball over. It's like, 'Come on, you've got to better.' I have to get better at that,” Thomas said. “I feel like that's one thing I'm struggling with right now is turning the ball over, taking care of the ball and finding those guys faster when they're cutting. I want to be more of a full threat to the game and not only scoring. I feel like there's going to be a time in the season when I'm going to be double-teamed, so if I can find guys early and keep the pressure on the defense, we'll be harder to guard.”