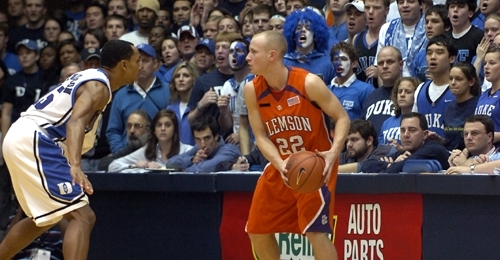 Oglesby was a terrific 3-point shooter at Clemson.

Terrence Oglesby is one of the most beloved players in Clemson basketball history, has a unique perspective on the game and will now be a regular contributor to TigerNet’s basketball coverage.

Oglesby, a starting guard on Clemson’s 2008-09 NCAA Tournament team, appeared in 66 games and scored 777 points in his two seasons with the program.

Oglesby received honorable mention for the ACC’s All-Freshman Team in 2007-08 after averaging 10.5 points per game as a reserve. Despite never starting a game, he led the team with 85 three-pointers that season, which included his memorable game-winning long ball to cap a 20-point come-from-behind win at Maryland.

A few weeks ago, Oglesby starting writing a recap of each game and keys to the next game, so TigerNet reached out to ask if he would share his knowledge with TigerNet and he agreed.

The contest will be televised on Fox Sports South with Tim Brando and Mike Gminski calling the action courtside, while Don Munson and Tim Bourret will call the action on the radio waves. The radio call will be available on the Clemson Tigers Network and Tunein.com.

Here are the three keys to the game:

*Ladies and Gentlemen after a tough game at Louisville, the Tigers come back home to play a Syracuse team with three top of the line shooters in ACC-leading scorer Elijah Hughes, Buddy Boeheim, and freshman scorer Joe Girard. Syracuse plays zone, we all know this, but this ain’t your high school zone, folks. If the ball goes in the high post, that means the middle man in the 2-3 matches up and the top guards run out to cover shooters. Ball goes to the “short corner” and automatic traps happen. Weird rotations mean quicker decisions, and that brings me to my first key to the game:

DON’T LET THE BALL STICK/INSIDE-OUT ATTACK - Syracuse has extreme length and poses problems to teams that don’t force them to move. There are spots in the zone that are always open, such as the short corner and middle of the zone. However, once you get the ball to that spot there has to be a quick decision made because rotations are fast. Another thing that Cuse makes teams do is shoot very deep 3’s. It looks as if shots are open (and they are), but they are usually from the Paw. (I wish they were in the league when I played at Littlejohn.)

2PT DEFENSE - With Hughes, Boeheim, and Girard on roster, the Orange are going to make some 3’s. You are going to have to live with a few. What matters to the Tigers is how are they shooting inside the arc. Seven out of their 8 losses have come as a result of shooting 48.4 percent or lower from 2-point range. This will be a challenge because of the Clemson small-ball approach. Traditionally Clemson has been able to guard ‘Cuse’s actions because they aren’t overly complex, but rim protection is key this game.

Clemson obviously needs to shoot the ball well against the zone, but the three keys this week focus on what the players can control. I had a boss once that told me daily, "if you control your controllables you will typically be ok with the outcome." Factor in that the Tigers are due for a good shooting day, I believe Clemson will have opportunities.

I’ll be live-tweeting the game from my Twitter handle @CoachTO22 so be sure to follow for in game analysis.