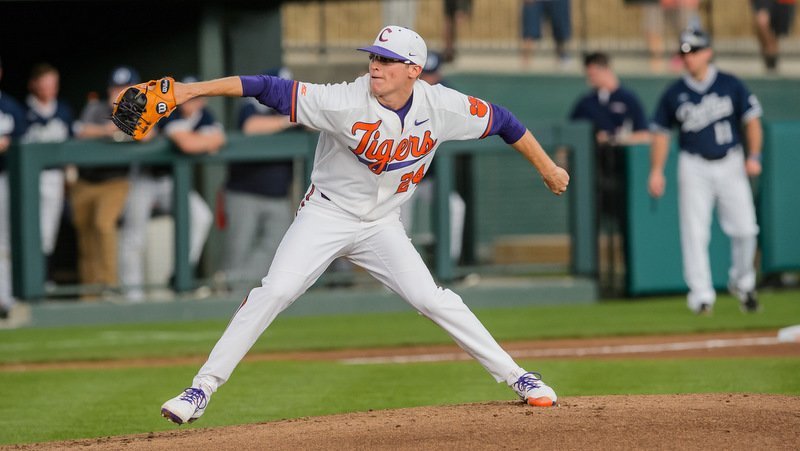 Clemson defeated Dallas Baptist in the first game of a doubleheader Saturday, and 12-1 Friday night. Clemson starts the season 7-0, while Dallas Baptist falls to 3-3.

Higginbotham pitched seven strong innings, giving up just five hits, one unearned run and striking out seven. Ryley Gilliam pitched the final two innings and picked up his second save of the season.

The Tigers managed just four hits and left four runners on base. Clemson threated in both the sixth and seventh innings but hit into double plays in both innings that killed the rallies.

Tiger pitchers were stellar all weekend, giving up just four runs in 27 innings. Only two of the four runs scored this weekend by the Patriots was earned. The Patriots had just 17 hits on the weekend, striking out 33 times while walking six times. All three Clemson starters, Jacob Hennessy, Brooks Crawford and Jake Higginbotham, earned wins in the series.

Clemson head coach Monte Lee said he was very impressed with the way his team played both games of Saturday's doubleheader. 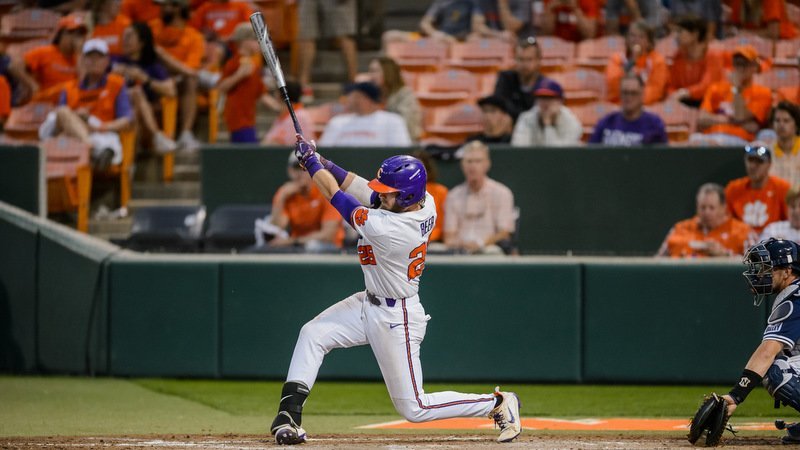 "Great day of baseball. Doubleheaders are always tough, but I give our guys a lot of credit for staying focused and competing as hard as they did for 18 innings against a great Dallas Baptist club," Lee said following game two. "Pitched extremely well and played great defensively. In game two, Higginbotham was very efficient. He only threw 70-something pitches through seven innings. Ryley Gilliam needed to pitch in a situation like that. That was good for Ryley. He's going to have to pitch out of tough situations. He pitched out of a tough jam right there. Very, very impressed with Ryley."

Higginbotham credited his fastball for his good outing.

"Fastballs. Threw a lot of fastballs again this week," he said. "I was using the slider as more of an out pitch. They were sitting on the slider in late counts so we tried to sneak fastballs past them. Just using the fastball was really effective."

The Tigers once again got on the board early. Logan Davidson started off the game with a single and Beer followed that with a two-run homer to right, his second of the season, and Clemson had the early 2-0 lead. Beer’s homer was a no-doubter into the Cajun Café.

Three singles allowed Dallas Baptist to score a run in the second, but further damage was averted as Higginbotham got a strikeout to end the inning.

Clemson scored a run without benefit of a hit in the bottom of the eighth. Davidson struck out swinging but reached first when the ball bounced away from the catcher. Beer walked to put runners at first and second, and Cromwell put down a perfect sacrifice bunt down the third base line. That brought up Chris Williams, who smoked a liner just short of the wall in right. The fly ball scored Davidson with the third run, and Beer moved up to third.

Jolly walked to put runners at the corners, but Wharton’s liner to the gap in left-center was hauled in by the centerfielder.

Gilliam allowed to hits and hit a batter with one out in the ninth, got a fly out for the second out but walked in a run to make it 3-2. He struck out the final hitter to complete the save and the sweep.

Outfielder Drew Wharton drove in six runs in Saturday's first game, and he said the Tigers are playing relaxed baseball.

"Everybody is just staying within their approach and is a lot more relaxed up there," Wharton said. "I feel like we're a lot more relaxed with runners in scoring position and less than two outs. We're not thinking too much. We're just trying to stay up the middle. We're pretty hot right now. We just have a lot of confidence up at the plate."

Clemson hosts Winthrop at 4 p.m. Tuesday. The Tigers begin a three-game series against arch-rival South Carolina Friday at Founders Park in Columbia. Game two is at Fluor Field in Greenville and game three will be next Sunday at Doug Kingsmore. The Tigers have won the season series over the Gamecocks each of the last three seasons.