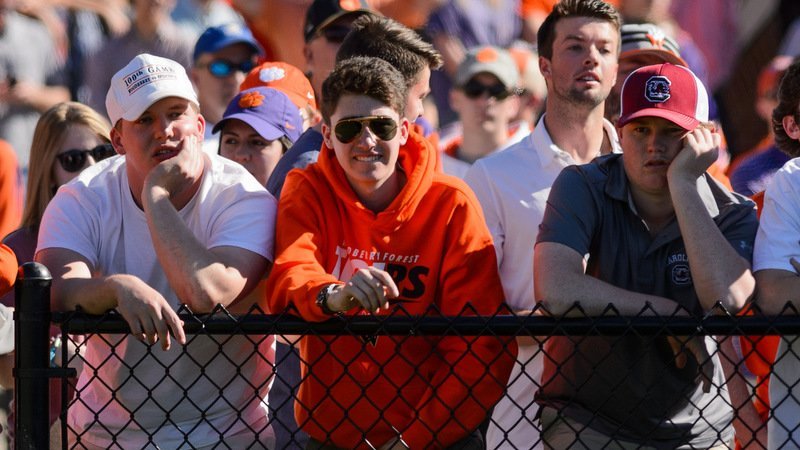 A picture is worth a thousand words (Photo by David Grooms)

Some of the news and notes and stats coming out of this past weekend are, in a word, incredible.

As we walked out of Doug Kingsmore Stadium late Sunday afternoon, the orange and purple-hued sunset seemed to echo what’s been happening around the state of South Carolina the last four or so years. Nikki and I put our bags in the back of the car and I turned to her and asked, “Would you have ever thought this possible five years ago?”

Oh yeah, that five years ago seems like yesterday.

The Tigers have a four-series winning streak over the Gamecocks for the first time since the 1986-89 seasons. That’s good, right? It gets better.

Clemson defeated South Carolina in football, men's basketball and baseball (2 games to 1) for the second consecutive year. That marks just the second time that Clemson has done that in consecutive years in the last 41 years. The other back to back sweep was 1997-98 and 1998-99.

Our staff photographer, David Grooms, captured a photo Sunday that perfectly sums up the rivalry as it stands today. A Clemson fan, all smiles, stands in between two South Carolina fans who look disgruntled and unhappy.

Five years ago, I wouldn’t have imagined this. And, despite what Todd Ellis thinks, I don’t think Clemson is cycling out anytime soon.

Following Saturday’s game at Fluor Field in Greenville, Nikki and I met up with a friend of hers who was excited about the victory. Jamie then mentioned that she hopes the Tigers are able to pull off the five-peat in football against South Carolina in November, and she said, “I love Dabo.”

I was quick to remind that we had similar conversations in 2013 – following the fifth consecutive loss to the Gamecocks on the gridiron – and she was heading over to Swinney’s house to help him move. She was ready for him to leave town. She didn’t care how many BCS bowl games or ACC Championships he won, she just needed him to beat South Carolina.

That’s how fans on both sides of the rivalry feel. Success away from the rivalry is great, but there had better success inside the rivalry. It’s the way it is. If you don’t beat your rival, people are going to show up at your door with moving boxes, hands on their hips while someone puts a For Sale sign in your front yard.

Early in the rivalry, Swinney downplayed things, and it didn’t sit well with people. He said that being from Alabama and growing up with Alabama vs. Auburn, he understood how rivalries work, but he also said that he was more about the big picture.

That changed when players and members of his staff began to show him pictures. Swinney is very gracious with anyone and everyone who wants an autograph and a picture. Swinney would be out somewhere, and strangers would ask him for photos. He would happily oblige, put his arms around them and flash a big grin. The strangers – South Carolina fans – would hold up four or five fingers as a subtle jab at South Carolina’s success over Clemson. The pics would make their way to social media and it would add to the lore of the running joke.

Swinney had no idea.

"I take pictures with people all the time. Just different people. I don't do social media, I don't have Facebook, none of that stuff," Swinney said last November. "I guess people take pictures and they (then) put it all over (social media). I would have random people show me something and I'd be like, 'Son of a gun!' I was just taking a picture with somebody. It was (at a) McDonald's or something. I had no idea. But that's just part of the rivalry.

"They don't like me because I work for Clemson, but I don't take that personally. They don't know me. They just know I'm the coach. And so if I'm the coach, I'm a bad guy going against them. That's just kind of how it goes in this state."

"It wasn't too funny. To be honest, it was disrespectful," Joseph said. "You've got a head coach that's taking time out of his day to take pictures with fans and disrespecting him like that ... I didn't think it was too funny."

Privately, however, those photos served as partial motivation for the Tigers’ desire to turn the series around, something they’ve done to the tune of 162-66 over the last four seasons. It added fuel to a rivalry that doesn’t need much fuel, even though the Tigers have won 14 of the last 21 in football, and that includes the five-game streak. Since 1997, Clemson has had three four-game winning streaks in the series but looks to add a five-peat this season.

Things are going Clemson’s way. For now. Enjoy the ride.