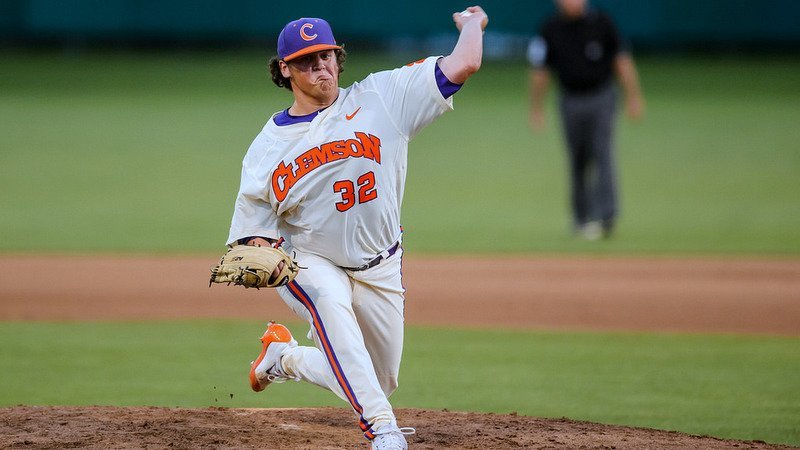 CLEMSON – The 2018 baseball season gets underway Friday afternoon, and all eyes will be on Clemson’s starting rotation this weekend.

The three-game series against Williams & Mary starts on Friday at 4:00 p.m. at Doug Kingsmore Stadium, continues on Saturday, Feb. 17 at 2:00 p.m., and concludes on Sunday, Feb. 18 at 3:00 p.m. Each contest will be broadcasted on ACC Network Extra via Watch ESPN.

Clemson lost the top four starters from a year ago and those hurlers combined to start 61 of the 63 games a year ago. Head coach Monte Lee announced earlier this week that Jacob Hennessy will start Friday night’s game, Brooks Crawford will start Saturday and Jake Higginbotham will start Sunday’s series finale.

All three pitchers have experience out of the bullpen. Hennessy made 26 relief appearances in 2017, with three saves and 2-1 record for the year with a 3.82 ERA. He averaged 1.23 strikeouts per inning. Crawford thrived as a long reliever during his freshman season, but a case of mono in 2017 limited his time on the mound. He made just 17 relief appearances last year, but had 26 in 2016 as a freshman, when he logged 40 innings of work with a 3.66 ERA.

Higginbotham redshirted last year due to injury, but made seven starts in 2016 as a freshman, racking up 28 strikeouts in 33 innings.

Hennessy, a local product out of Dorman High School, said he can’t wait to take the mound.

“I am excited and ready to compete starting on Friday,” Hennessy told TigerNet. “I started my entire high school career and last year was my first year coming out of the bullpen. I felt pretty comfortable there and had a good offseason and worked on another pitch and I'm ready to go. I have a year under my belt and I've pitched in some really big games so that helps.”

Hennessy said he expects to have as many as 15 friends and family members in the stands Friday.

“Just growing up in the area and constantly hearing about Clemson baseball and getting a chance to make this start is a really cool opportunity,” he said. “I have worked on my changeup and I think that will help a lot. I had a pretty good changeup but didn't throw it a lot last year because I was coming out of the bullpen. But I've worked on it and I threw it in the fall and now I feel like it is a plus pitch for me. It will help against righties for sure.”

Lee said those were the three that stood out during camp.

"There were a number of guys in the mix," Lee said. "But we felt like, the first weekend, these guys had experience and they’ve thrown well enough to deserve to start. But we’re excited about a number of guys and how they’ve been throwing the baseball."

William & Mary and Clemson will meet for just the seventh-ninth time in series history this weekend. The Tigers hold a 5-1 all-time series lead over the Tribe. Each contest between the programs has been played in Clemson, S.C., including an NCAA Regional tilt in 2000.

The Tribe returns a plethora of experienced position players for 2018. A total of seven players made at least 38 appearances last year, but 57% of the pitching staff are true freshmen.