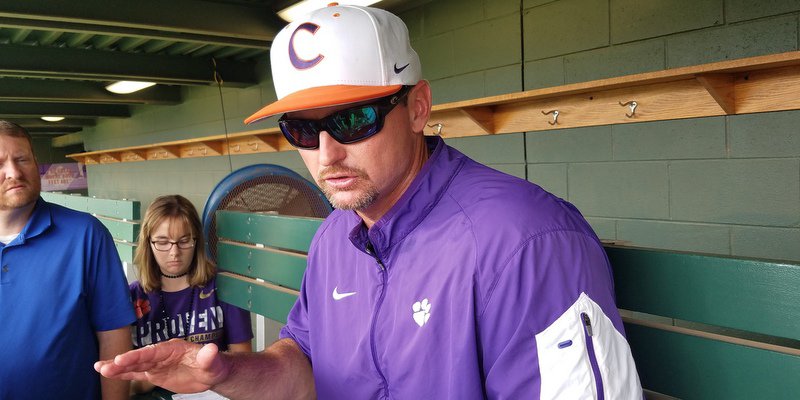 Lee talks to the media Tuesday

CLEMSON – The sound of laughter filled Doug Kingsmore Stadium once again Tuesday afternoon, the sound young men playing the game they love and having fun at practice.

In the middle of it all was head coach Monte Lee, who laughed, cheered, jeered, pushed and had fun with a team that needs a little fun right now.

The Tigers are preparing for this weekend’s NCAA Regional and practiced early Tuesday afternoon under cloudy skies. Clemson reached the tournament for the ninth consecutive season, and for the second consecutive year, the Tigers will open against the Southern Conference Tournament champion. Last year, Clemson defeated Western Carolina twice by a combined score of 39-13. The Tigers were subsequently bounced from the double-elimination bracket by Oklahoma State.

This year, Clemson will face UNC-Greensboro, who clinched the Southern Conference title Sunday with a 13-1 win against Furman at Greenville’s Fluor Field. The Spartans averaged 7.9 runs per game through their previous ten outings.

Clemson, the No. 1 seed in the regional, will open against No. 4 UNC-Greensboro. First pitch is scheduled for 7 p.m. No. 2 seed Vanderbilt will face No. 3 St. John's at noon.

On Tuesday, however, there was no thought of opponents, just having fun playing a game.

“It's very hard for the head coach. You wear everything on your sleeves. As one of my dear friends used to say, wins and losses goes on the head coach's record and the starting pitcher's record,” Lee said. “Those are the only two people that have to wear the win and the loss. You live and die a lot of times as a head coach with wins and losses. I've grown as a coach over the years and understood that if I am gonna get the most out of our guys, I have to have their back all the time. I have to be with my guys all the time, when we are going through good times and when we are going through bad times.”

Lee said he wants his players to understand he will be there for them, through the good times and the bad.

“When we are going through good times, we talk about what we need to do better. When we are going through bad times, we talk about what we're doing well,” Lee said. “Confidence is fragile, and the main thing in my job is letting those guys know I care about them and that I have their back and that we are always in this thing together. We've been through some great times and some tough times, and we've done it together. I ask our guys to bring great attitude and effort to the ballpark every day, and our guys do that.”

To start Tuesday’s practice, Lee put a pitching machine at home plate and set it up to throw high pop ups on the infield. Each pitcher got two or three chances to chase the high flies, with Lee running from home plate and screaming and first baseman Andrew Cox running from first base and screaming. There were a few nice plays, a few drops and an outright miss or two.

“I want my guys to be loose, but sometimes that is hard because your players care. The hardest thing to do in coaching and playing is getting guys to understand the difference between practice and playing in the game, because oftentimes there is no consequence in practice,” Lee said. “So guys are too loose in practice and then they get too tight when it comes to games. Well, you have to trust your training. You have to trust what you did in practice that week, and you just react. You just play. It’s there and you’re ready, and that’s the thing about this game is you have to get guys to understand that practice is so valuable. This is where we get better. Game time, you just have to go play with no fear of failure or consequence. If you can do that and you can play that loose, that means you’ve worked your butt off in practice.”