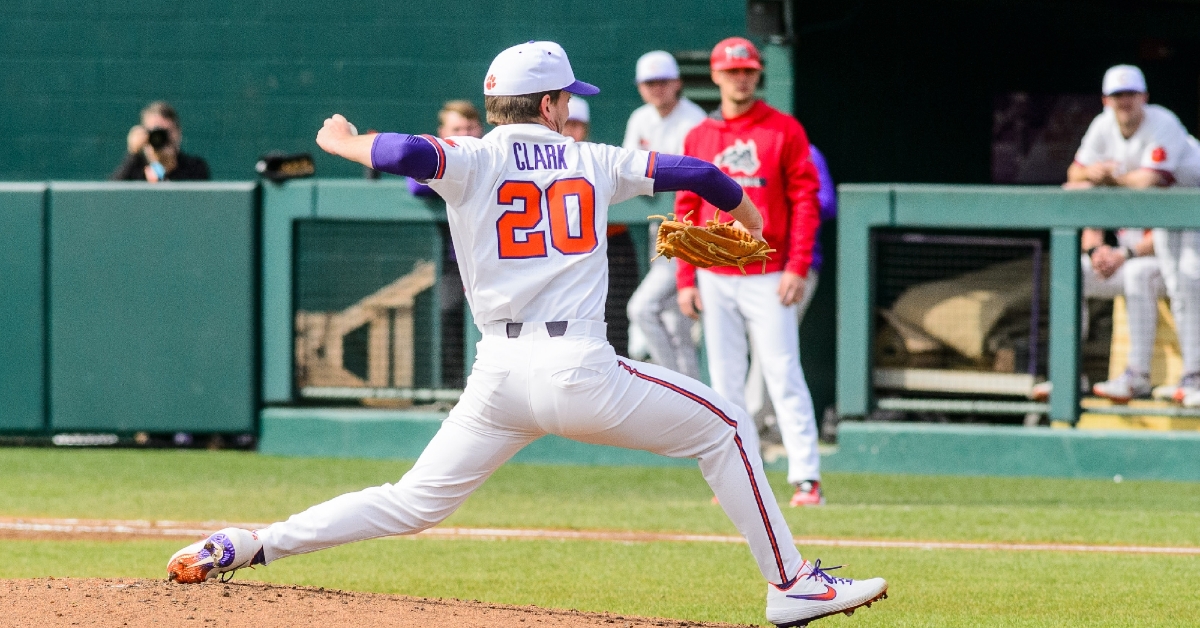 CLEMSON – The baseball season is just seven games old, but head Clemson head coach Monte Lee thinks his pitching staff has a chance to be special.

Clemson completed a three-game sweep of Stony Brook Sunday with a 3-1 victory. Clemson pitchers gave up just that one run over the weekend and the team ERA dropped to 0.70 through the first seven games. Sunday’s run was unearned but stopped a scoreless streak that stood at 33 innings, the longest such streak since 1967 (38).

Lee said he knew the pitching staff had a chance to be good.

“Did I think we would be this good? I knew we would be good. I really did. I felt very confident in saying that I felt like we would be very good on the mound,” Lee said. “To this extent? I don't know that you could ask a pitching staff to be this good through seven games. That is asking a whole lot to throw up that many zeroes and to pitch as many quality innings as we've had this year by the guys we've been running out there.

“It's been a lot of fun to watch and we know that our pitching staff is going to give us a chance to be in every ballgame. And if we can get our offense going a little bit we will continue to become a better and better ballclub.”

In 64 innings pitched this season, Tiger pitching has given up just 36 hits, eight runs (only five are earned), walked 30 and struck out 93 batters while giving up just one homer.

However, Clemson’s offense is struggling. The Tigers have hit just two homers, have scored just 21 runs, and are hitting just .233 (47-for-202) as a team.

“We continue to struggle offensively, but we've got to keep pressing on and keep fighting through it. Guys are staying positive in the dugout,” Lee said. “I think the more pitches you see and the more at-bats you get, you start to square up more balls. You look at some of these young guys we are playing. I think offense is contagious and it's a momentum type of deal. All we need right now is we need a couple of guys to smoke some balls back to back. We need one of those innings where we get two or three hard-hit balls and I think it will be contagious.

“Guys right now are pressing a little bit. We are doing a good job of competing in the box, we just have to square some balls up. The middle of our order has to stay in the strike zone. I think we are coming out of the zone a little too much. I think our offense has a chance to get it going a little bit, but until then, the pitching staff has to continue doing what it's done and hopefully we can continue to be consistent and win some ballgames.”