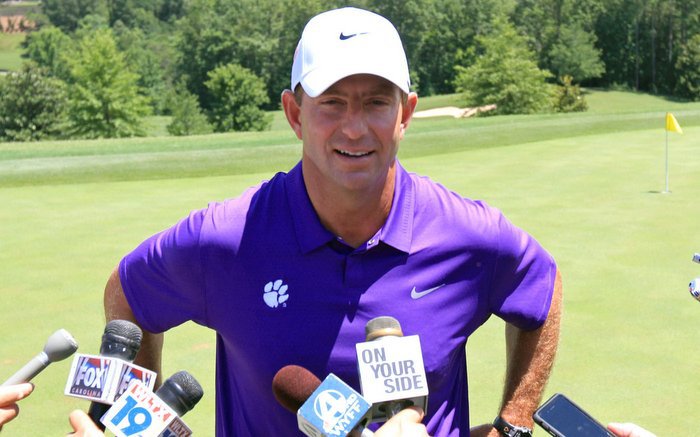 SUNSET – Clemson’s football team has a lot of high expectations heading into the 2015, season, but faces just as many question marks after off-season turmoil and roster turnover. However, Dabo Swinney

Dabo Swinney
Head Coach
View Full Profile expects his team to play in 15 games, meaning his goal is for the Tigers to play for the ACC Championship in December and earn a playoff spot.

Swinney met briefly with the media at his annual media golf outing at The Reserve Wednesday afternoon, and he said he was excited about the start of the season.

“We look forward to that. We have a lot to do with this year’s team in particular. We will get back to our staff meetings with the coaches tomorrow, and we will start our All In meetings next Wednesday. We have a lot to do as a staff. We have a great staff, and it’s going to be a fun year to come to work every day. You have to have talent, and we have talent. I love our roster. But we have a lot of guys that have to develop, and that is what coaching is all about and the process of camp is all about. There are always guys that surprise you that you didn’t expect and then there are some guys that disappoint you a little bit.”

Swinney said that he thinks some of the answers to the big questions will be answered quickly.

“We think from a talent standpoint, we have some answers in replacing a Grady (Jarrett), a Stephone (Anthony), a Robert Smith

Robert Smith
Safety (2011 - 2014)
#27 5-11, 215
St. George, SC
View Full Profile , but will those guys bring the same intangibles? They're not going to have the experience factor,” Swinney said. “That's just the way it is. Will they bring that daily commitment, some of those leadership qualities? That's what we've got to find out on a bunch of those young guys. Our first group, defensively, is really talented, good experience and you probably won't notice a lot of difference, but the depth and the type of depth that's going to be the difference for us. Growing guys up early will be the difference for us.”

The Tigers will face uncertainty in special teams and will likely have all new starters when the season begins on Sept. 5th against Wofford.

Andy Teasdall
RS Jr. Punter
#95 5-11, 185
Winston-Salem, NC
View Full Profile and challenge him and give him the opportunity in the bowl game,” he said. “I feel great about Andy Teasdall. I really think he is poised to have a good couple of years. He's going to be a junior.”

Ammon Lakip
RS Sr. Punter / Kicker
#36 5-11, 200
Alpharetta, GA
View Full Profile – arrested in early June – will have a chance to come back to the team once school starts on August 19th.

“The biggest question is our kicker and the situation with Ammon Lakip. Ammon will hopefully have a chance to return to our team and at the earliest will be when school starts,” he said. “He will miss time and we'll talk more about that later, because right now it's on him to follow through on some things that he has to do. Camp is all about the guys that are here. We signed Alex Spence

Alex Spence
RS Fr. Kicker
#47 6-2, 190
Florence, SC
View Full Profile and felt like he was one of the best kickers in the south and the best in this state. We were able to redshirt him last year and he's excited about his opportunity. Christian Groomes

Christian Groomes
RS Fr. Punter / Kicker
#39 5-9, 190
Central, SC
View Full Profile and another young man from Blythewood - we'll have some guys in camp. Special teams wise, that is the biggest question knowing that Ammon is out.

I like our team. I like the way they've worked. It's been a really good summer. You get a couple of guys that steal all of the headlines when they don't do what they're supposed to do and that's unfortunate because 98-percent of - 112 out of 115 guys - really had a good summer.”

Swinney was asked if the Tigers can replicate last season’s success, and he said he didn’t know but the goals are still the same – play in 15 games.

“I don't know about that. That's really hard to answer. I think we're a very talented roster,” Swinney said. “We recruited well, but defensively six defensive linemen, two linebackers, and three defensive backs - 11 guys from last year’s defense are on NFL rosters. Offensively, I think we have a chance to be better and we will be better. Defensively, we led the nation in 11 categories, I don't know that we can do that but I do think we can still be one of the best defenses out there. There are still a lot of questions. Is the talent there? Yes. Is the experience there? No. Do we have excellent coaches? Yes.

“Do we have the intangibles - the toughness, the work ethic? We don't know. That's what we have to go to work to find out. Is the leadership going to be there when we need it? There are more questions this year. When you look on the offensive side, you know a lot more with so many guys coming in during the spring. We're in a different spot there. It's going to be an interesting year. I think we have a chance and if we live up to our potential and our standards, we certainly have a chance to be one of those teams. Our goal is to be in 15 games this year. It's real simple. We want 14 or 15 games, that's what we're trying to do. We've got 12 and we know that, but everything after that you have to earn. You earn that through what you do on Saturdays and a Thursday.”

Swinney then touched on the dismissal of Ebenezer Ogundeko

“I think Ebo could've been a good player for us but he's not here. We've got 18 defensive linemen on scholarship,” he said. “We have a bunch of guys over there and we'll have a nice group that will be able to line up and play. From an offensive line standpoint, we wish Battle the best. I'm proud of him. I'm happy for him that he's got an opportunity to take this next step. It would've been great to have had him here to transition to a guy like Mitch Hyatt

Mitch Hyatt
Fr. Offensive Line
#75 6-6, 270
Sugar Hill, GA
View Full Profile , but if he would've gotten hurt you have to play anyway. I think it's good that we're getting an opportunity to enter camp and get Mitch going. After what we saw in the spring, he gives us the best chance going into camp.”