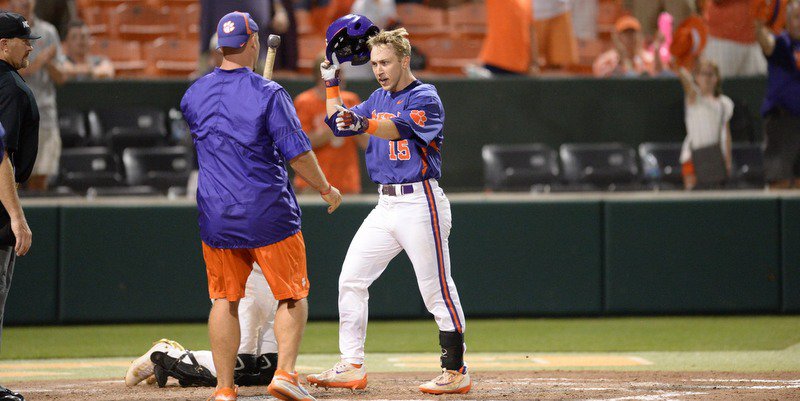 Weston Jackson hit a his eighth home run of the season

CLEMSON – The Jackson Five are known for their greatest hits, but Clemson’s Jackson Two threw out plenty of hits of their own late Sunday.

Tyler Jackson pitched a complete game, two-hit shutout and Weston Jackson had three hits and drove in three runs helped lead No. 1 seed Clemson to a 6-0 victory over No. 2 seed Vanderbilt in the early hours of Monday morning at the NCAA Clemson Regional in Doug Kingsmore Stadium.

The teams will play at 4 p.m. on Monday in a winner take all rubber match to advance to a Super Regional.

Clemson head coach Monte Lee said he's never been a part of a better baseball game and because of his team's performance they will play for a trip to Corvallis, Oregon to face top-seeded Oregon State.

"I've been coaching for a long time and I think that's the best baseball game I think I've ever seen with my own two eyes. I don't think I've ever seen a team play that well," Lee said after the game. "When you look at the pitching performance by Tyler Jackson, how we played defensively. I don't know if I've ever seen a better game defensively. We played extremely well and made a lot of not only good plays but great plays and we had some big time hits. We had two strike hits. We had two- out hits. Our guys really, really competed. I don't know if we could've played a better baseball game. I'm just really proud of our guys. Now we're in a position to play for the championship of this Regional. We need to try to carry this momentum into tomorrow and see if we can find a way to get it done."

Tyler Jackson – who was undefeated in mid-week games during the regular season – was phenomenal Sunday night and Monday morning. The graduate student out of Piedmont retired 14 in a row between the two hits he surrendered.

Jackson surrendered just two hits and Lee said it was because he stayed down in the zone with his pitches.

"It's one of the best outings I've ever seen. He just did an unbelievable job of locating his fastball," Lee said. "He pretty much pitched with his fastball the whole game. He did a really good job of locating the fastball on the outside corner and then expanding off the plate once he got ahead of them. He lived at the knees down and really didn't give them a whole lot of pitches to hit."

The bottom of the order gave Clemson a jolt offensively. Weston Jackson, Grayson Byrd and Kyle Wilkie combined to go 7-for-12, scoring three runs and driving in five.

The Tigers got the early momentum by scoring in the top of the first. Seth Beer was hit by a pitch with two out, and he moved to second on a wild pitch. That brought up Chase Pinder, who fell into a quick 0-2 hole but doubled down the left field line, scoring Beer for a 1-0 lead.

Vanderbilt’s Drake Fellows pitched four scoreless innings before Clemson broke through again. Weston Jackson launched a 1-1 pitch into the Chapman Grandstands to extend Clemson’s lead to 2-0 in the sixth. It was Jackson’s eighth home run of the season.

The Tigers let a golden opportunity to add to the lead slip by in the seventh. Logan Davidson singled to left with two out, and Reed Rohlman followed with a fielder’s choice (and a late throw to second) that put runners at first and second. The Commodores elected to replace starting pitcher Drake Fellows with lefty Zach King, who came in to pitch to Seth Beer. Beer walked on a 3-2 count, but Pinder’s rocket to short was fielded cleanly and the score stayed 2-0.

The Tigers added on in the eighth. Weston Jackson singled to center with one out, and he moved to second on a wild pitch. Grayson Byrd rifled a 0-2 pitch past the second baseman and into right field and Jackson scored easily to make it 3-0. Byrd, who moved to second on the throw, scored easily on Wilkie’s double down the right field that made it 4-0.