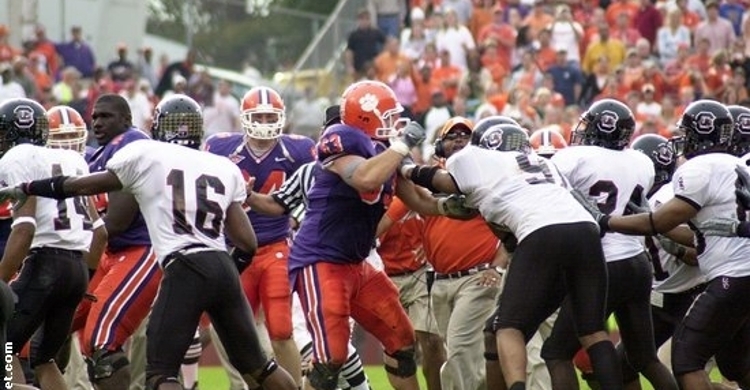 It was a free-for-all all over Frank Howard field that Saturday.

The big games, clutch comebacks and oddities from the slate over the years are worth that extra look as the Tigers have made their rise to an elite college football program.

Today, we examine some of the more odd circumstances in-and-around Tiger football games.

What happened: This one is as much about the Georgia-Georgia Tech rivalry as it is Clemson and Georgia Tech. The Tigers beat the Bulldogs by a 29-0 score in October 1903, but Georgia couldn’t stand for looking worse than their rivals from the big city. They struck a deal with Clemson that they would send them a bushel of apples for every point the Tigers beat Georgia Tech worse than they beat Georgia that next week (after all, the Atlanta Journal had reported that "Carolina folks esteemed apples most [among potential promises]...such vicious habits as demon rum, ping pong, and other forms of vice common to a large city are unknown...no sooner is school dismissed than the collegians rush to the apple granary and feed on the succellent fruit as a pastime. Now Clemson's orchards are bare and apples are what the boys want most."*)

John Heisman’s Tigers were up for the challenge and ran up a school-record 615 rushing yards in a 73-0 win to earn 44 bushels of apples. The Yellow Jackets were held to 28 rushing yards on 35 carries. Clemson tallied those impressive numbers even with the second half being shortened to 15 minutes because of the beatdown. The performance certainly impressed those in charge at Georgia Tech, who would pursue and hire Heisman after that season.

That wasn’t the lone oddity in the Clemson-GT series in Heisman’s time. In the prior season, the part-time Shakespearean actor sent Clemson’s junior varsity team to Atlanta to act like his squad and party all night, giving the Yellow Jackets that heard word of it a false sense of security. Clemson’s real team then went out and rolled Tech, 44-5, the next day.

What happened: There are a couple of all-too-literal instances in the Battle for the Palmetto State football rivalry, one in a distant past and another that you wish was further back.

Even in its early years, Clemson had become accustomed to beating South Carolina with regularity and was riding a four-game winning streak into its 1902 meeting in the state capital. But in a game marked by a replacement official that didn’t call a single penalty (former Furman coach Bronco Armstrong), the Gamecocks broke the run with the upset in a 12-6 victory. The aftermath of South Carolina celebration, however, was the story here.

South Carolina students paraded down the streets first on the Thursday night after the game with an image of a Gamecock prevailing over a Tiger, which caused some brawls, and then the next day -- despite warnings -- in an actual parade, where a group of 400 Clemson cadets still in town for the state fair didn’t take too kindly to it. Armed with their bayonets, they forced a retreat of those South Carolina students into a house that the students barricaded and armed theselves in. Cooler heads eventually prevailed (after a South Carolina assistant arrived to the scene to challenge Clemson cadets to a fight as a diversion until authorities arrived), but state officials called a halt to the series that would last until 1909.

Fast forward just about 100 years and the next big fight came on the field between the rivals in Death Valley. Only hours after the ‘Malice at the Palace’ NBA brawl that went from the court to the stands, the Tigers and Gamecocks came to blows in a full-field fight that resembled a no-holds-barred WWE match, with helmets being swung and players pile-driven into the ground. Coming off of a 63-17 beatdown the year before in Columbia, Clemson was cruising toward a third-straight victory in the series up 29-7 with just under six minutes left. A chippy game came to a crescendo after a Gamecocks offensive play:

The game would resume but that would be the final action for both teams that season, which would each agree to a postseason ban as punishment. It was the final game of South Carolina coach Lou Holtz’s coaching career, which had been previously-announced.

What happened?: Long before Holtz’s unceremonious career end, there was Ohio State legend Woody Hayes and the late-game punch that rendered his coaching days over.

Down 17-15 late in the Gator Bowl, Ohio State QB Art Schlichter’s pass over the middle went right into the arms of Clemson defensive lineman Charlie Bauman, who returned it to the Buckeye sidelines:

More clear on the TV broadcast than to those in the stands, Hayes grabbed Bauman and punched him in the throat and continued to accost him until his players intervened. The Tigers closed out the 17-15 win, in Danny Ford’s first game as head coach. Hayes, Ohio State’s coach from 1951-on, would be fired before even leaving Jacksonville.

What happened?: The 1983 season stings a bit in the annals of Clemson football history as an undefeated ACC campaign that isn’t recorded that way in the books due to NCAA probation. The Tigers’ ACC finale was memorable on-and-off-the-field, however.

Clemson hosted No. 11 Maryland and the added attraction for packed stands was a ‘Spirit Blitz’ that sought to break a Guinness World Record. The Clemson faithful released over 350,000 balloons pregame to top the mark.

Boomer Esiason’s Terps didn’t stand a chance either, with Ford’s Tigers jumping out to a 42-7 lead with a strong ground game before wrapping up a 52-27 win. Clemson fans took the down goalposts on one end of the field to celebrate the win over Maryland, who would go down in the record books as the ACC champs (5-0 in its officially-recognized ACC games).

What are your memories from some of these games? What are some more odd ones that stand out to you?