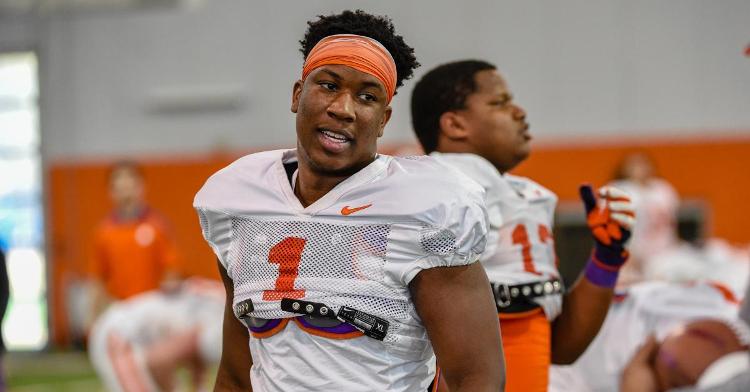 Henry is ready to be a leader and every down player

CLEMSON – KJ Henry played in four games a year ago, ending his stretch on the field with a four tackle performance in front of his home crowd in Winston-Salem in the Tigers’ blowout win over Wake Forest. A year later he’s stronger and more prepared for the rigors of a college season.

Henry saw action in the opener against Furman and against Georgia Southern and Georgia Tech and finished the season with five tackles. Henry transitioned to the scout team and spent time with Joey Batson and the strength coaches in Power Hour and enters 2019 ready to contribute on every play.

“I would say physically (is where he improved the most). I am more confident in my body,” Henry said this week. “I know as a high school player all I was, I was an edge rusher … a skinny guy that came off the edge. I didn’t really like to play on those early downs, but now I have the frame to back myself up. I think it starts with me. Everybody can have confidence in myself, but if I don’t have it in myself then there’s no point.”

Henry earned a reputation as an edge rusher with speed but knows that if he wants to play on the collegiate level he has to better against the run.

“I think I have improved from last year. I have still got a ways to go,” he said. “It is definitely something Coach (Dabo) Swinney and I have talked about. At the end of the day there is a standard here. I’m not there yet, but I’m definitely working to get there. I’m definitely taking steps forward.”

Henry said Swinney has challenged the youth along the Tigers’ defensive line.

“We got challenged by Coach Swinney to get after it and I think the defense definitely accepted that challenge,” he said. “As we went through practice the offense got at us a little bit early, but we stepped up and accepted it at the end and finished well.”

Where does he think he can improve?

“I think being consistent. Coming into the scrimmage my goal was to grade better, better than I have in practices and I got out there and was so amped up in that moment it just slipped,” Henry said. “I think I definitely need to improve on being accountable.”

As one of the more likable – and vocal – members of the defense Henry is looking to take on the mantle of team leader.

“Being known as the young guy, that’s not how my teammates see me anymore,” he said. “It’s time for me to step up. I think I have to get better at being more accountable on each play. Making the right plays, being in the right position.”