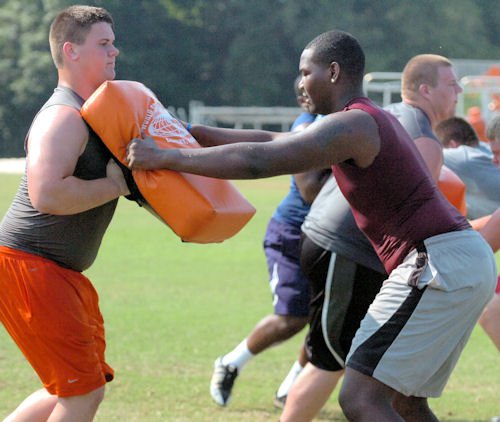 Jay Guillermo and Javarius Leamon at a recent football camp at Clemson.

One of the state’s top offensive tackles, Leamon (6-6, 260) was in Clemson for the Dabo Swinney Camp last week for all three days, and following the camp Swinney told him that he would like to see Leamon back this week, but to not come alone.

“I am just going up there for the day,” Leamon told TigerNet Sunday afternoon. “I am going up there with my mom. Dabo told me last week that he wanted to meet my parents, and so did Coach [Brad Scott], so I am going to show them around and let them meet everybody.”

The second session of Dabo’s camp begins Tuesday, but Leamon said Monday’s visit will be his only time on campus for the week. However, he did learn a lot during his three days last week.

“It was pretty fun,” he said. “I enjoyed getting to hang with the guys like Patrick [DeStefano] and Jay Guillermo

Oliver Jones
Offensive Line
6-5, 292
Ninety Six, SC
View Full Profile . I enjoyed doing the one 1-on-1’s and kept getting called out by people who were trying to prove points.

Leamon said that he and Caldwell have developed a close relationship over the past few months.

“We get along great,” he said. “We pretty much talk about everything. His high school is Central High School [formerly Pageland Central], and they have been playing each other in the upper state for a while now and we talk about that. He is a great guy.”

In addition to Clemson, Leamon has offers from Auburn, East Carolina, Tennessee, South Carolina and Vanderbilt, and he said he is going to wait until National Signing Day before making a decision.

“I really don’t have a leader at this point,” he said. “Everybody is the same.”