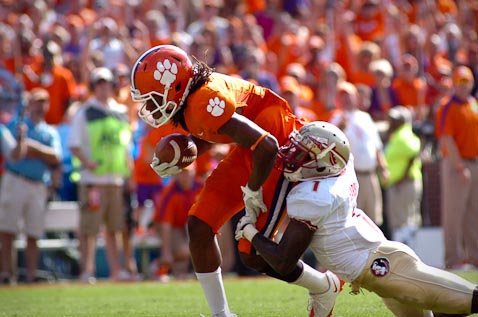 Freeman likes Clemson's matchups on the outside

CLEMSON – The sounds of Florida St.’s ‘Warchant’ have echoed over the Clemson campus this week as Clemson head coach Dabo Swinney

Intimidated? No chance of that, according to Clemson center Dalton Freeman

“Nobody is intimated, and I hope we don’t have anybody on this team that’s intimated,” Freeman said this week. “I think we have a lot of respect for them, but nobody is intimidated.”

Freeman said he remembers that the Tigers were underdogs two years ago for a late-season trip to Tallahassee, and he feels like the Tigers won the game everywhere but on the scoreboard as the Tigers fell 16-13 on the last play of the game.

“I just remember being extremely frustrated because we moved the ball up and down the field on them,” Freeman said. “We had around 400 yards of offense, and I think Jamie Harper

Jamie Harper
Running Back
#8 6-0, 235
Jacksonville, FL
View Full Profile had almost 150 yards rushing [he finished with 143] and we had over 200 yards passing and we couldn’t find a way to get a way to get it into the endzone. We had to settle for field goals, and then we missed two field goals. At the end, we gave up a pass interference which put them in field goal range – we didn’t think it was field goal range – but they were able to kick it and win it.”

Chad Morris
Offensive Coordinator / QBs
View Full Profile preaches preparation, and that he and the rest of the offense are prepared for the challenge.

“It speaks to the character to the guys we have,” Boyd said. “Nobody is going to go in there and think that we don’t have a chance to win or feel intimidated. We have put so much work in during the offseason, and there is nothing intimidating to us. It is just more of a thing that we are ready to go to work. “

Josh Watson
RS So. Defensive Tackle
#91 6-4, 285
Wilmington, DE
View Full Profile says he hears all of the talk about how Clemson will lose because of the defense, and how the Tigers’ young defenders won’t be able to stand up to the FSU rushing attack.

His answer? Don’t talk about it, just do it.

“We can make all that go away by just going out there and proving them wrong,” Watson said. “I can’t talk it into existence. I can’t say something and just have people respect us. You can’t change people’s perceptions just by talking. You have to go out there and do it. The time for talk is over. Actually, we are really confident. We have been in this position before. That was the story last year – going up to Virginia Tech and people said we couldn’t stop them up there. And we rose to the challenge, and I think we rise to the challenge in big games. But it has to be done on the field.”

Freeman said instead of being intimidated by the environment or the fact that he has to face the nation’s top-ranked defense, he is embracing the challenge.

“As a competitor, you want to play against the best,” he said. “They are a great defense, and definitely the best we have faced. We are excited about it. They are going to try and stop the run, but by doing that they are going to leave a lot of matchups out on the edge and we are hoping our speed and athleticism can match up well with their speed and athleticism. It should be a great matchup.”