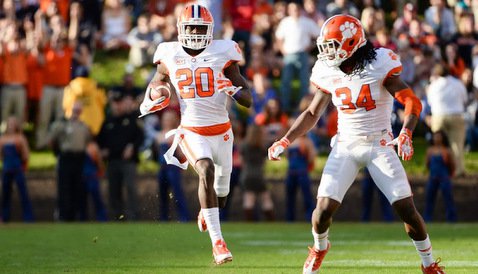 Safety Jayron Kearse was one of the players Beasley mentioned as much improved from last season.

CLEMSON – A high school coach that was a visitor at one of Clemson’s football practices last week walked out of the indoor practice facility, brushed aside all questions and announced that he thought the Tiger defense had a chance to be extra special in 2014.

"We can be the number one defense in the country," Beasley told the media after Friday’s practice. "I think our front seven is the best in the country."

The Tigers have been led the last few seasons by a bevy of offensive stars who acted as the de-facto team leaders, names like Tajh Boyd

“With the loss of Tajh and Sammy on the offense and even guys like (Spencer) Shuey and Quandon (Christian) on the defense, we definitely need a leader,” Beasley said. “With me leading the d-line along with guys like Grady (Jarrett), Josh Watson

If the Tigers are indeed going to be a force on the defensive side of the ball, the secondary will have to improve on last year’s efforts. That is something that Beasley says he has already seen in practice.

"The main difference is our secondary is improved a lot from last year," he said. "We have improved a lot in the secondary. Those guys are stepping up and making big plays for us. I feel they're going to have a larger effect in this year's outcome. MacKensie Alexander

MacKensie Alexander
RS Fr. Defensive Back
#2 5-11, 185
Immokalee, FL
View Full Profile didn’t play much last year because he was hurt, but he has shown this spring that he picks things up quick. He has shown he can be a starter and help us out this year. And there are other guys that have shown they have really improved.”

Beasley said the defense won’t back down from expectations.

“The bar was set high last year, and we are going to take the same approach that we are going to be the best that we can be,” he said. “Best is the standard as Coach Swinney says, and that is our approach every game and every practice.”

Corey Crawford
Sr. Defensive End
#93 6-5, 270
Columbus, GA
View Full Profile – who was suspended by Swinney for the opener along with three other players. However, that hasn’t affected Crawford’s preparation or work ethic according to Beasley.

“He has been fine. He is out there working every day,” Beasley said. “He knows he is still a part of this team.”

The defense had its chance to make an early statement in last Monday’s scrimmage. The quarterbacks were “live” but the defense failed to tally a sack.

"I was quite disappointed," Beasley said. "It was a good experience for us. We had chances; we've got to capitalize on them. I didn't get back there, but my teammates did. But they missed their opportunity, too."

Beasley said that the defenders – who are used to just touching the quarterback in those scrimmage situations – were thrown off of their game by the change.

“That's the excuse we use," he said with a smile. "But we'll take the loss right there. They got the best of us in that area. But we've got a Top 10 offense and a Top 10 defense. Players make plays."