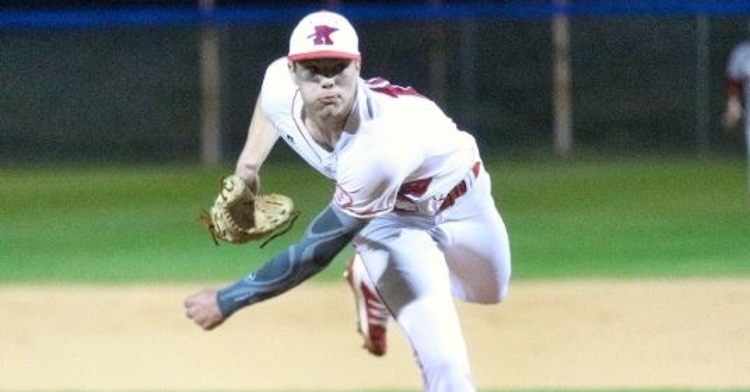 It’s unusual for a high school player to turn down guaranteed money from the Major League Baseball Draft and give up three years to go to college, but Caden Grice isn’t your usual baseball player.

Grice is a 6-6, 230-pound left-handed pitcher/first baseman/outfielder out of Riverside High School in Greer, who is well-known to major league scouts. Grice committed to Clemson when he was just a freshman at Riverside, but major league scouts have been a constant presence at his games over the last two seasons. The attention grew when he played for the Canes National travel baseball team last summer.

The MLB Draft was shortened this season to five rounds and 160 picks, down from the usual 40 rounds and more than 1,200 picks that the draft had in previous seasons.

However, Grice had the opportunity to play professional baseball – major league teams came calling – but told the pros he felt his best choice was to attend Clemson.

“I had the chance to go but I turned down a couple of teams because I felt like Clemson was the best choice for me and my future,” Grice told TigerNet. “I kind of went with my gut and prayed about it and everything was pointing towards Clemson. So, I just went with my gut.”

“I think they are the best,” Grice said. “They have believed in me since I was a freshman and that speaks a lot. I can't wait to get there and compete for them. They are going to let me pitch and they are going to let me play first base. And if they need me in the outfield, they know I can play out there. Whatever they need me to do, I am ready for it. Whatever they tell me to do.”

Lee said Grice will take on the role of Davis Sharpe, who is a starting pitcher on the weekend but also starts at designated hitter and first base.

“Having Grice come in is a big, big deal for us,” Lee said last week. “We’re talking about a guy who could have signed for a significant amount of money, but he valued his education, valued the opportunity to come to Clemson. His power grade is the highest a professional scout can put on a player, so (scouts) think he has tremendous power with the bat. He just also happens to be 6-foot-6, left-handed and throws 93 as well. So, a lot of scouts are kind of torn as to what they see him at, at the pro level.

What type of pitcher are the Tigers getting?

“I think I am very, very raw as a pitcher. I haven't had a lot of instruction on the mound,” Grice said. “And so, I think getting there and getting into a set program is going to help me develop a lot. I think I will make a pretty big jump once I get there. I throw a two-seam fastball, a four-seam fastball, circle change and the curveball. My fastball is up to 94 and my changeup is my best pitch. But my breaking ball is also still a really good pitch. But I am comfortable with my changeup in any count to any batter.”

What type of hitter?

“Very, very aggressive. I like to hit balls hard. When I step into the box, I have a dog mentality. I am ready to go. It's the same thing on the mound,” Grice said. “I get comparisons a lot, but the main one is Joey Gallo. I have watched him a lot. He is a big guy, left-handed, and he is pretty fast,. He is probably a little faster than I am but I am working on it.”