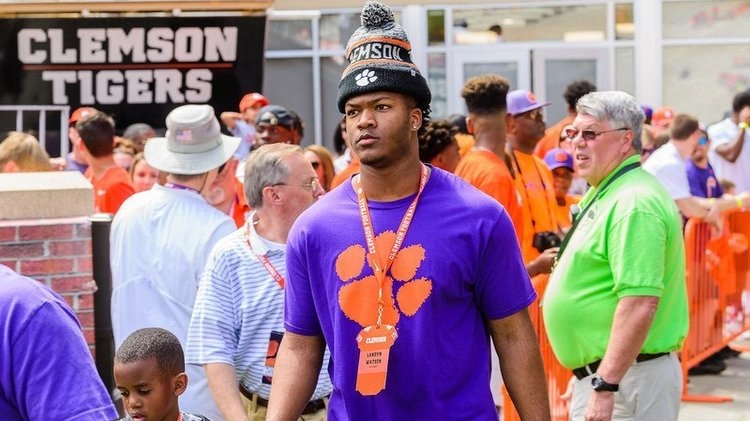 The Clemson coaching staff hasn’t been shy about reaching into the state of Texas to recruit and now has interest from one of the fastest-rising defensive end prospects for the 2021 recruiting cycle.

The Tigers recently received a commitment from one of the nation’s top defensive back prospects in RJ Mickens out of Southlake, Texas. Landyn Watson, a 6-3 225-pounder out of Hutto (TX), made the trip to Clemson’s campus for the spring game in early April.

Watson boasts 13 offers, including LSU, Oklahoma St., Notre Dame, Michigan St., and Virginia Tech. Hutto sits just 30 miles from Austin and the University of Texas and a little over 80 miles from College Station and Texas A&M. Both of those in-state schools are showing considerable interest.

However, Watson really wanted to see what Clemson was all about.

“Well, I've been following Clemson's flow for a while now,” Watson told TigerNet. “I've been very interested and wanting to get up there, and we were able to make the trip to get up there for the spring game. And plus, I've had Coach (Brent) Venables, and a couple of other Clemson coaches follow me, which means that they're pretty interested in me as well. They've been talking to my high school coach as well.”

Watson said the Clemson coaches made an instant impact.

“Right off the bat, I walked into the facility, and a lot of the coaches already knew who I was,” he said. “I was very excited to come down all the way from Texas, which showed them I am interested. And we got to tour the facilities. Not all the players got the tour of the facility, but Coach (Lemanksi) Hall took me around the facility, the indoor practice facility, and the weight room to just let me get a feel for things.”

“The facilities stood out to me, of course,” Watson said. “And the coaches. I was blown away by how excited they were to see me. That pretty much stood out to me the most.”

Watson was also impressed by the spring game turnout.

The Clemson coaching staff is working on dispensing offers for the 2021 class, and Hall said he wants to spend 1-on-1 time with Watson before offering.

“I am hoping to make it to Clemson’s camp in June,” he said. Coach Hall said he would love to see me. He said he wants to work with me 1-on-1 and get a better feel for everything. He said he already knows what I can do, but he wants to work with me in person and get a feel from it. He was saying that an offer will definitely come, but that right now I just have to trust the process.”

Watson also hopes to make it back to campus for a game next season.

“I definitely want to come back. I was talking to my parents, and we might end up coming back, but if not over the summer then we're gonna get up there for a game during football season,” Watson said.

Which programs are showing the most interest right now?