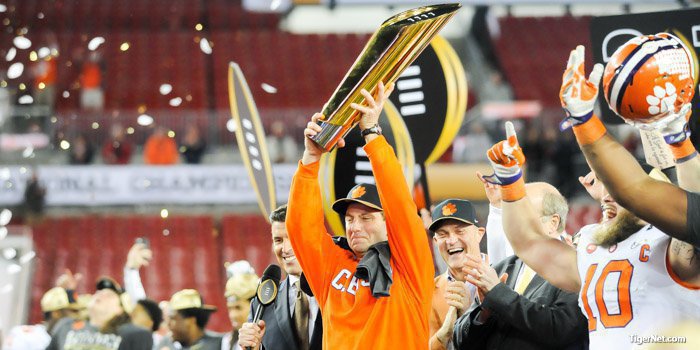 Clemson is ranked fourth in the first College Football Playoff Poll released Tuesday night. How did the Tigers wind up in the top four despite a loss to Syracuse a few weeks ago? It all starts with the resume.

Clemson is 7-1 so far this year with wins over six teams with winning records, the most in the nation. Those six teams (Auburn, Louisville, Virginia Tech, Boston College, Wake Forest and Georgia Tech) are also ranked in the top 40 of many of the latest computer rankings.

Clemson, Alabama and Ohio State are the only schools to be ranked in each of the 20 College Football Playoff Polls in the four years of the system. This is the 13th straight ranking that Clemson has been in the top four, a streak that dates to the first poll of the 2015 season.

Clemson has two victories over teams ranked in the top 15 of the first College Football Playoff Poll, wins over Virginia Tech and Auburn, who are 13th and 14th, respectively. Clemson and Iowa State are the only teams to defeat two top 15 teams in the CFP Poll so far this season.

Kirby Hocutt, the Chair of the College Football Playoff Committee, said Clemson’s resume was the difference over other one-loss teams like Oklahoma, Ohio St., and Penn St. They committee also took into account the fact that quarterback Kelly Bryant was injured in the loss to Syracuse.

"Clemson, impressive resume," Hocutt said. "Six wins against teams with a winning record, two wins against CFP Top 25 teams, only loss the quarterback was injured, returned the following game. And head-to-head results were important for the selection committee. Really, this discussion for teams three through seven was as passionate as I’ve ever seen.

"I know N.C. State last week lost on the road in South Bend, but going back home (against) Clemson, it's another opportunity to kind of prove how good of a football team they are in a tough environment,” Herbstreit said. “(N.C. State) is kind of an upstart team with a very good defensive line. I think that game's exciting."

Herbstreit, like Hocutt, mentioned the fact that Clemson is a different team with a healthy Bryant.

"Kelly Bryant his healthy. Chris (Fowler) you and I saw him and I think the fact that he came back and Clemson won, but how Kelly Bryant looked in that game that is how close the committee is in watching these teams and that is really why I think Clemson moved up into the top four,” he said. “It was because of not only the wins that they have but we all know how dangerous Clemson is when Kelly Bryant is healthy and it was great to see him back and healthy last week for the Tigers. They have kind of picked up themselves after that loss to Syracuse and doing good things now."

"When you get in that (committee) room in that scenario, Alabama having one loss, because their resume is not going to stack up maybe with a Notre Dame, it's not going to stack up with some other one-loss teams, maybe a Clemson, because Clemson's September was historic,” McFarland said. “Three top-15 wins in September -- nobody had ever done that."

Strength of Record: Clemson is third, Oklahoma is fifth and Ohio State is ninth

Strength of Schedule: Clemson is fifth, Oklahoma is 24th, and Ohio State is 35th