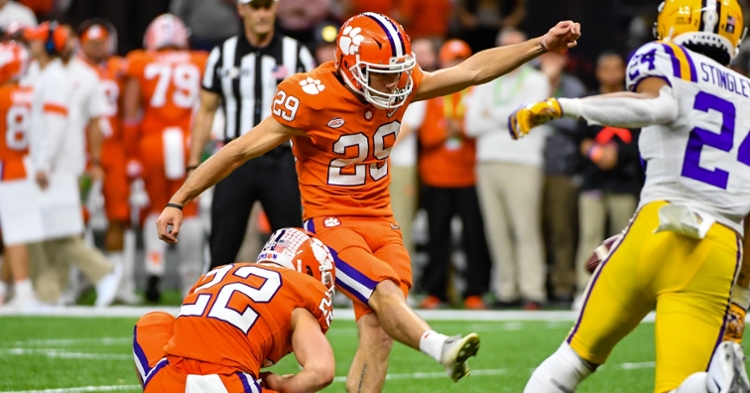 Potter kicks a 52-yarder against LSU.

BT Potter wanted to end his inconsistent 2019 season on a high note, and he did it with a 52-yard field goal against LSU in the National Championship Game in front of a sold-out crowd in the Mercedes-Benz Superdome and millions more watching on television.

That kick is just the confidence boost he needed heading into 2020.

Clemson’s rising junior kicker enters the 2020 season with a 14-for-22 career mark on field goals and an 86-for-86 mark on PATs in 30 career games. He has also contributed 214 career kickoffs with 158 touchbacks and a 63.4-yard career kickoff average in his first two seasons.

However, he was just 13-for-21 on field goals last year and is looking for more consistency this season, but said he isn’t setting any goals: it’s all about the team.

“I feel it's all about the team goals. The season didn't end how we wanted it to end and during the spring I felt like we were all pretty confident in our team. We are all just looking forward to next season,” Potter said during the spring. “Obviously it's consistency (what he is working on). This off-season I wanted to break down my form, and just noticing little things like my toe being up, and things like that. I worked on it all spring and it has been pretty good.”

Potter also struggled from the left hash last season - he was also 6-13 on kicks from 30-49 yards out - and said it began to play tricks with his mind.

“It really did mess with me, but that is something I need to be able to control,” Potter said. “It's something we focused on a lot this spring and me and Coach Swinney talked about it. I think I was 61 percent from the left hash and 75 percent from the right or something like that. So during practice we will practice more from the left hash and do our kicks from there, just working on that. We film ourselves and break it down and I will send to my coaches back home and get them to help me.”

Potter is now the old man in the specialists' room after the graduation of long-snapper Patrick Phibbs and now he’s ready to get back on the field.

“Honestly, this off-season I've missed it. Even with the bad kicks I had last year. I miss the opportunity and getting back out there and I am excited about getting back to it,” he said. “Especially after Patrick Phibbs left, it really hit me. It hit me that I am going into my third season and I've got two left, so I am working on enjoying it.”

Potter did end the season the way he wanted to - he recorded a career-long 52-yard field goal vs. No. 1 LSU, his third field goal of 50 yards or more in 2019 to tie Richard Jackson’s school record for 50-yard field goals in a single season from 2009.

The 52-yard field goal tied for the 10th-longest in Clemson history and was the longest in Clemson bowl history, surpassing 49-yard field goals by Obed Ariri (1977 Gator Bowl vs. Pittsburgh) and Ammon Lakip (2014 Russell Athletic Bowl vs. Oklahoma). The 52-yarder vs. LSU was the longest made field goal in College Football Playoff National Championship Game history, surpassing a 51-yarder by Georgia’s Rodrigo Blankenship against Alabama in the game to conclude the 2017 season.

“Going into the Playoff last year, I was a little bit scared. I was like, I have kicked off in these big games but I have never kicked field goals,” Potter said. “So when we got into the National Championship, that was obviously the biggest game I have ever kicked a field goal in. It was crazy and I really enjoyed it. It was fun. The night before the game I was sitting in my room and I was like I need to go out good with this last game, and I felt like I did good. This past offseason I've been thinking about that and it makes me believe I can go up from here."