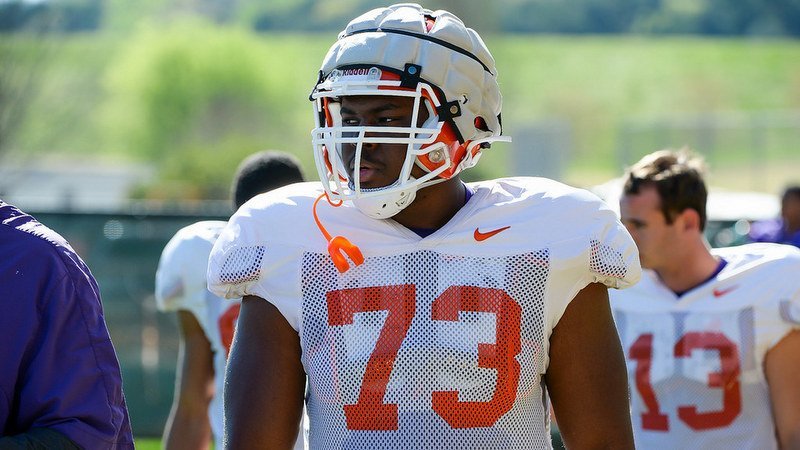 CLEMSON – Tremayne Anchrum is battling for a starting spot at right tackle, working out at left tackle and dividing his reps with a bunch of hungry young players who are eager for playing time. He’s also turning into a team leader who thinks the line has a chance to be special.

Anchrum told the media last week that while last year’s team was special, this year has a chance to be even better and it starts with the guys up front.

“We had a lot of milestones and set a lot of records. We could’ve gotten more but that’s a part of the process that we have embraced,” Anchrum said.. “The offensive line has a lot coming back and we are going to be the best we have ever been. Respects to the older generations, but I think we a lot of depth, a lot of talent and ability in the offensive linemen. Coming up we expect high expectations and high standards. We’ve got to move the ball, we’ve got to run it and we’ve got to protect the quarterback, really as an anchor to this offense.

“The offense goes as far as the offensive line goes. We’ve got Jackson (Carman) coming in, he is a great addition. Matt Bockhorst, Seth Penner, Blake Vinson, and Chandler Reeves are all coming up as young guys. They have really started to step up and bloom and get into their peak, so I am really excited to see what is coming forth. For me, I am really expecting to have my best season.

Anchrum split time with Sean Pollard last season, but Pollard is working out at right guard as offensive line coach tries to replace Tyrone Crowder at the right guard spot and Taylor Hearn at left guard. Anchrum didn’t shy away from the competition.

“It wasn’t that difficult; competition really brings the best out. You had to be on you’re a-game,” he said. “If I had an 89 and he had an 89.5, it was like “hey man, you’ve got to edge it to get the better grade.” It made me better. It made me realize that I can’t waste anything … a practice rep, a walk-through rep, a weight room rep, everything counts. It was difficult switching from left to right coming in mid-game, but I like the challenge to be versatile.”

What does he want to improve on during spring practice and the off-season?

“Consistency. Being my best on every rep and not letting one lazy rep get me or one tired day get me, just being consistent,” Anchrum said. “Being a leader, setting the example for the younger guys behind me, and just being what I need to be for the team.

“Understanding the game, understanding who you are playing and game-time situations. Really understanding that we are all players and we are good enough to be on this field and we’ve worked enough and bloomed enough … so, it’s time to put it forth and work.”

He's also taking the time to admire the work of the youngsters.

“Yes, it is exciting to see the young guys get after it,” Anchrum said. “They spent all last year working versus the veteran team. To see them coming and competing against these guys for actual live reps is pretty exciting. The future has a lot to bring.”

“He gets after it. He loves physicality. He’s not afraid to get out there and take some risks. Even though he has a long way to go and is not as sound as he wants to be, he still has a lot of upside and a lot of ability,” Anchrum said of the Ohio native. “He is pretty big. He is the offensive equivalent to Dexter Lawrence, so we should see some good battles in the fall with those two.