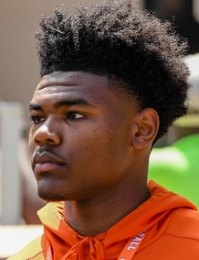 Linebacker
B I O
Five-star linebacker who committed to Clemson on Dec. 14, 2019 and signed with the Tigers four days later … will play in Under Armour All-America Game on Jan. 2, 2020 in Orlando … rated as the top player in the state of North Carolina according to many services … participated in The Opening in Frisco, Texas in the summer of 2019.

Played for Michael Palmieri at Mallard Creek High School in Charlotte …helped his team to a 10-1 record and No. 3 ranking in the state of North Carolina according to MaxPreps … started his high school career as a running back, playing both running back and linebacker in 2019 … led the Mallard Creek defense with 20 sacks … had 44 carries for 371 yards and six touchdowns … for his career, recorded 97 carries for 799 yards and seven touchdowns with 8.2-yard average per carry.

Recruited to Clemson by Danny Pearman and Brent Venables … originally committed to Auburn … wore No. 22 in high school … expected to enroll at Clemson in January 2020.