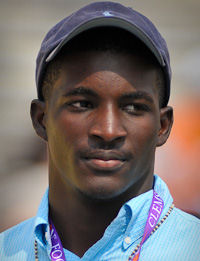 Athlete
B I O
As a junior, he rushed for 1,900 yards and 22 touchdowns, and passed for 600 yards and 5 touchdowns. As a sophomore, he had 49 tackles and more than 1000 yards on offense. Attended Clemson's junior day in March. Attended the 2011 Orange and White Game in Death Valley. 2010 Aiken Standard Offensive Player of the Year. #28 rated player and 4 star recruit based on the 2012 AthleteVault NC/SC Rankings.

He is very tough and versatile playing quarterback and safety for his high school team. Mostly likely will be a safety or a running back at the next level. He also could be looked at OLB if he bulks up. He is very fluid in his hips.