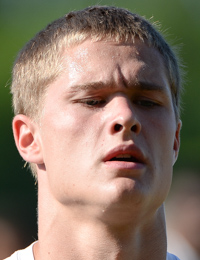 Outside Linebacker
B I O
Played in the Army All-American game in San Antonio…ranked as No. 56 overall player in the nation by Rivals.com…also ranked No. 179 overall player by 247 Sports and a top 300 player by ESPN.com….second best player in the state of Virginia by Rivals, 247 Sports rates him the ninth best and ESPN.com the 10th best…among linebackers, Rivals sees him as sixth best in the country, while 247 Sports has him 14th and ESPN.com 19th… participated in The Opening where he was the third ranked all-around athlete after competition with the other 161 players in attendance.…played his high school football for Paul Troth…played linebacker, tight end, receiver and safety over his high school career…as a senior had 90 tackles, 15 for loss…on offense had 19 rushes for 118 yards and 24 receptions for 444 yards and seven touchdowns…the all-around player also kicked two field goals…as a junior in 2013 had 72 tackles, 13 tackles for loss, including six sacks…contributed five interceptions as well and added 113 carries for 757 yards and 12 rushing touchdowns on offense…two-time all-state, all-region and all-conference choice…had three blocked field goals as a junior…recruited by Brent Venables…committed to Clemson on April 10, 2014…signed financial aid agreement with Clemson on August 1, 2014… enrolled at Clemson on Jan. 7, 2015.

As a junior, he earned Conference 21, North Region and Group 4A first-team honors. For the season, he had 95 tackles (13 for loss), 3 quarterback sacks, 5 interceptions and 2 fumble recoveries.