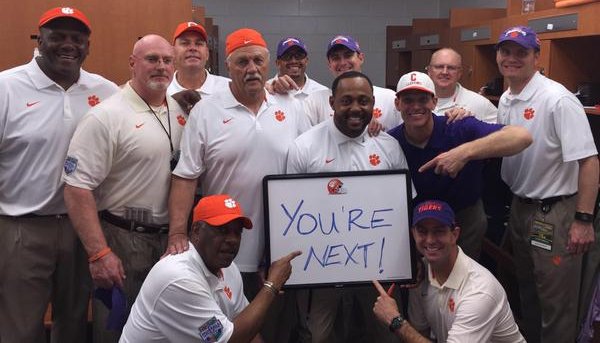 Clemson's coaches sent a message to their recruits after the game. Photo courtesy of Clemson Football twitter

Clemson’s 40-6 win over Oklahoma in the Russell Athletic Bowl didn’t go unnoticed by Clemson’s commits and targets, and TigerNet reached out to several prospects to get their take on the Tigers’ dominating effort.

Clemson has one of the nation’s best recruiting classes for 2015 and will have 16 early enrollees on campus this Sunday. While the bowl game didn’t necessarily change their commitments, the game provides the coaching staff a big talking point for the 2016 and 2017 recruiting classes.

"It was domination by the Tigers!! It was fun to watch! The intensity they played with overwhelmed Oklahoma. It was great to see the seniors go out with a win. They have left their mark on clemson football for sure!"

I thought it was a great win I’m glad that the seniors could finish that way I just can't wait to be able to play out there next year! I'm proud to be a Tiger!

“That Clemson defense was just filthy! The offense was hitting on all cylinders too. Just a great dominating win. I was excited from start to finish!”

“I think the team really came to play. Everyone was prepared and everyone was hungry for a win. Cole Stoudt had a fantastic game, he really deserves the MVP spot. And the defense was lights out! Shut down one of the best rushing attacks in the country. It was a great team win and a great way for the seniors to go out.”

“Amazing performance on both sides of the ball. Total domination.”

“I thought it was huge for Clemson to do that.”

“Clemson played a great game and their defense held them really well.”

“Thought it was a great team victory and was a huge win to end this season.”

"I am very proud how Cole Stoudt played I am happy he got to leave Clemson with a win and our D played really well so over all it was just a very well coached game and the players went out and played hard and got the win. I couldn't be more proud to be a Clemson Tiger.”

“They have the best defensive coordinator in the nation and it showed. The boys came ready to play and the defense set the tone early. Cole Stoudt played the best game he’s ever played this season. They clicked on all cylinders. That program has a bright future.”

“Absolutely outstanding. Best overall game they have played all year.”