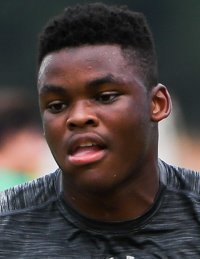 Linebacker
B I O
A national top 250 player by ESPN and 247 Sports…ESPN lists Jones as the No. 202 player in the nation, the eighth best outside linebacker…247 Sports calls him the No. 209 player and the 15th best OLB…played linebacker for IMG Academy in Bradenton, Fla., but his hometown is Nashville, Tenn.…had five tackles for loss in seven games… played his senior year at IMG, helping that team to a No. 2 final national ranking and a 9-0 record…played two years at IMG, helped team to 11-0 record in 2016…team was ranked fourth in the nation that year…had 22 tackles, five tackles for loss, five PBUs and a fumble recovery in 2016….IMG was 20-0 in his two years there..… will play in Under Armour All-American game in Orlando…considered a 4-star prospect by Rivals.com… he had 11 touchdown passes and ran for another 10 scores in 2014 at high school in Nashville, Tenn….had 13 sacks and 60 tackles on defense that year ….committed to the Tigers on 06/16/2016….recruited by Tony Elliott and Brent Venables.

He had 11 touchdown passes and ran for another 10 scores in 2014. He also had 13 sacks and 60 tackles on defense. After the season, he was awarded a 2014 Eastbay Youth All-American and also named to the USA developmental team. He has a 285 lb bench press.