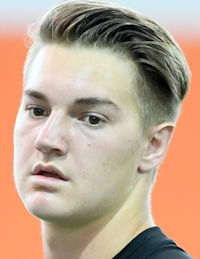 Wide Receiver
B I O
Second-generation Clemson player who played wide receiver and safety in high school … had 49 receptions for 719 yards and seven touchdowns in 2018 as a senior … had 47 tackles, five tackles for loss, and five interceptions on defense … returned one interception for a touchdown … had one of his best all-around games in the season opener, he had eight catches for 103 yards and a touchdown on offense, and an interception on defense against Ridgeland … had one of his best games in the state playoffs when he had 87 receiving yards and a touchdown in a victory … Region 6 AAA Athlete of the Year … first-team all-region … first-team Chattanooga Times All-Area … County Player of the Year … in 2017 team won the state championship with a 14-1 record … played his high school football at Calhoun High School for Hal Lamb … high school teammate of 2019 Clemson signee Davis Allen at Calhoun High … showed his athletic ability at the Atlanta Regional of The Opening, where he finished second in the competition to Nolan Smith, one of the top five players in the nation … brother of Clemson linebacker Baylon Spector … his father, Robbie Spector, was a wide receiver for the Tigers who lettered from 1988-90 … Clemson won two ACC Championships when Robbie was on the team and his senior class had a 40-8 record with four straight 10-2 seasons … also has a sister, Blair, at Clemson … also ran track at Calhoun, competing in the 100, 200, long jump and triple jump … Clemson recruiters were Brandon Streeter and Jeff Scott … committed to Clemson on October 28, 2017 … plans to enroll at Clemson in January 2019.