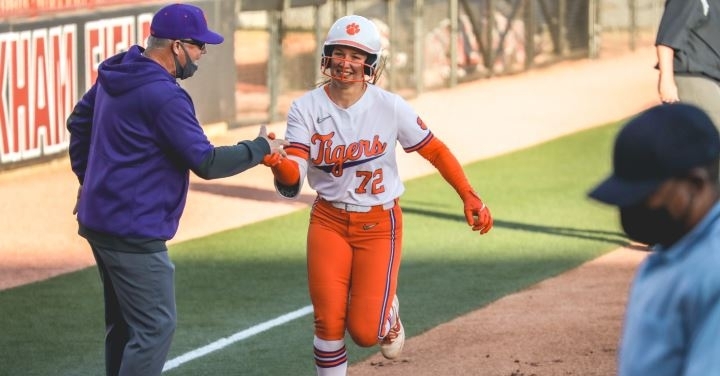 Clemson, S.C. – The Clemson athletic department has announced winners of the Frank Howard Award, the IPTAY Athlete of the Year, and the Brandon Streeter Award for the 2020-21 academic year. A 23-person committee made up of local media and Clemson administrators voted on the candidates.

The Frank Howard Award is the honor presented each year to a student-athlete for bringing honor to Clemson athletics. This year’s recipient is softball All-American Valerie Cagle. She is the first female Clemson athlete to win the award in 11 years.

Few players in the nation contributed to her team’s success in as many ways as Cagle this year. The second-year freshman led the ACC in wins (28) and home runs (17). In the circle, she ranked 11th in the nation in ERA (1.16) and posted eight shutouts, including two no-hitters. At the plate she led the team in batting average and RBIs. Nine times this year she was the winning pitcher and hit a home run in the same game.

Cagle was a big reason Clemson won the ACC regular season championship, reached the NCAA Tournament and had a final top 20 national ranking in its first full season of competition under head coach John Rittman.

The IPTAY Athlete of the Year takes into account excellence on the field and achievement in the classroom and the community. This year’s recipient is Clemson quarterback Trevor Lawrence.

The native of Cartersville, Ga. was the top selection of the NFL draft, a first for a Clemson football player. He was named the ACC Player of the Year, the ACC Athlete of the Year, the most Valuable Player of the ACC Championship game, and a first-team All-American by the American Football Coaches Association.

Lawrence was second in the voting for the Heisman Trophy and was a finalist for the Manning Award, the Davey O’Brien Award, the Johnny Unitas Award and the Walter Camp Player of the Year.

He was also the recipient of the Bobby Bowden Trophy, which goes to the top all-around student-athlete in college football. He was also named to the AFCA Goodworks team, which honors football student-athletes for their work in community service.

Lawrence’s all-around leadership paced Clemson to a 10-2 team record, including a 9-1 mark in the games he started. He ended his career as Clemson’s winningest quarterback with a 34-2 record. Clemson never lost a regular season game that he started.

The Brandon Streeter Award is presented each year to the Clemson student-athlete who has overcome physical injury to achieve greatness on the fields of competition. It is named after Clemson’s current quarterback coach who overcome multiple injuries throughout his career (broken ankle, broken ribs among them) to lead the Tigers during the 1999 football season.

This year’s recipient is women’s track student-athlete Laurie Barton. Barton was the national runner-up in the 800 meters indoors and outdoors this year. She earned first-team All-America honors in both awards. Her times were the second best in Clemson history and she set the ACC outdoor meet record in the 800.

She was equally successful in the classroom and earned academic All-ACC honors in indoor and outdoor completion as well.

These are remarkable accomplishments when you consider what she has overcome to have a normal life, let alone compete at a national level. Barton has had to deal with a rare kidney ailment called minimal change nephrotic syndrome over the last few years.