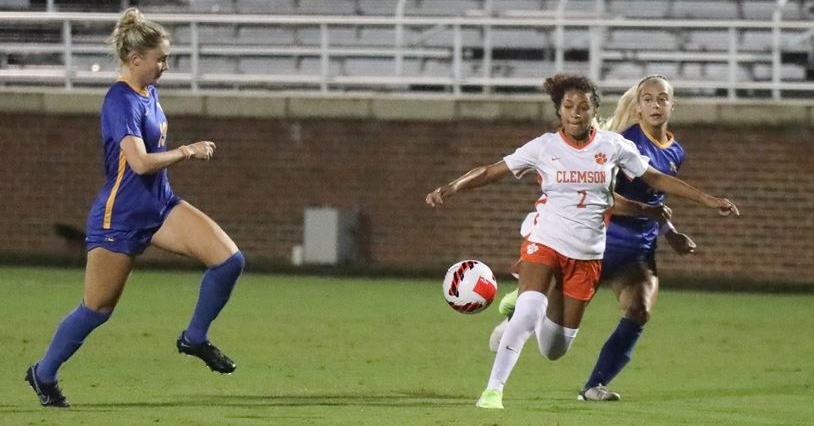 CLEMSON, S.C. – In its first ACC match of the season, the Clemson women’s soccer team (6-2, 1-0 ACC) capitalized on opportunities and played consistent defense all match long to solidify a 2-0 win over Pittsburgh (7-2, 0-1 ACC) on Thursday night at Historic Riggs Field.

Junior Hal Hershfelt scored the first goal for the Tigers in the 17th minute. This was the third match in a row that Hershfelt has scored the first goal for Clemson, and this one came off a give and go from Makenna Morris, registering her fourth assist of the season. The stout Tiger defense held the Panthers to only three shots in the first half and only one shot on goal, which was defended by goalkeeper Hensley Hancuff.

The Tigers continued knocking on the door in the second half until Maliah Morris drew a foul in the penalty box to create an opportunity for the Tigers to stretch their lead to two. Sophomore Megan Bornkamp converted on the penalty kick to cement the win for the Tigers.

Hancuff led the defensive effort for Clemson while recording the clean sheet with three saves.

“The girls showed a lot of respect for Pitt because we had a super tight overtime game with them last year, and I was really proud of the composure they showed,” said Associate Head Coach Jeff Robbins.” “We played fantastic defense in the first half, and we are really proud of the kid’s execution of the game plan. We had some moments in the second half where we could have been more composed, but the most important thing is that our first ACC game ended with three points.”

The Tigers will travel to Raleigh to play NC State next Thursday night at 7 p.m. before heading to Chapel Hill to battle the Tar Heels on Sunday afternoon at 1 p.m. to finish the road stretch. Game coverage for both matches will be available on ACCNX.

Taking down a Top 20 opponent at home?

Not a bad way to start ACC play ?? pic.twitter.com/YBYm6HfOcj

MEGAN BORNKAMP CONVERTS ON THE PK ????

Tigers increase their lead by two here with 10 minutes left in the second half!! pic.twitter.com/fWz58usQMi