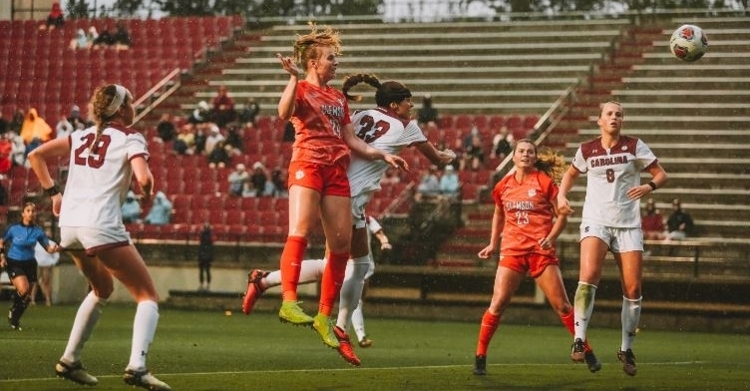 COLUMBIA, S.C. – The No. 8/11 Clemson women’s soccer team picked up their 12th win of the season as they downed in-state rival No. 11/9 South Carolina 2-1 at Stone Stadium on Saturday night. It marks the second consecutive year that the Tigers have defeated the Gamecocks after taking the 2019 match by a 1-0 margin and just the third time in the all-time series they have gone consecutive years with wins over South Carolina. Clemson moves to 12-4-0 on the season as South Carolina falls to 10-4-0.

“It’s a great result for having two highly-ranked teams play each other,” said Head Coach Eddie Radwanski. “What a great response from our kids – they went out there and did it with an incredible second half. To come down here and beat them on their field to cap off an undefeated spring is special.”

In the opening half, the Tigers got off to a strong start, dictating play within the offensive third. However, a goal kick from South Carolina was deflected within the midfield and a rushing Corinna Zullo was able to break free and slot a ball to the lower-left corner of the net. Despite South Carolina holding the halftime advantage with its 28th-minute strike, Clemson led the first half with eight shots and forcing the Gamecock goalkeeper to make four saves.

Clemson dominated the second half of action with much of the play residing within the attacking third. It would take until the 72nd minute for the Tigers to find the equalizer after a Maliah Morris shot was saved with the ball being directed into the crossbar before Megan Bornkamp cleaned up the initial attempt for her seventh goal of the year.

Just 10 minutes later and off of a Renee Guion corner, Borkamp connected on a header that was able to beat the cluster of Gamecock defenders. The 82nd-minute goal gave Bornkamp her team-leading eighth goal of the season, moving her points total to 17, sitting in a tie for the team lead with Caroline Conti. The assist was Guion’s fourth of the season, a mark that ties Morris for the team lead in that category.

The Tigers landed nine of their 18 total shots on target while holding the Gamecocks to six shots total with only one recorded shot in the second half of action.

Clemson closes out the 2020-21 regular season on a six-game winning streak and undefeated throughout the spring portion of the season. The Tigers will await their postseason selection with the selection show scheduled for April 19th.

The arch rivals put on a show in the rain at Stone Stadium tonight as 8th-ranked Clemson edged #11 South Carolina 2-1.
A tough, physical match between 2 outstanding programs. @GamecockWSoccer @clemsonwsoccer pic.twitter.com/aAam3OPTZ4