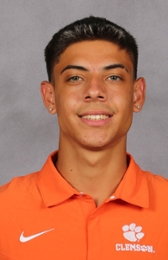 Forward
B I O
Before Clemson: Garcia played at a professional youth Academy team in Italy called Virtus Entella for six years playing against teams like Juventus, Inter and A.C. Milan’s youth academy teams. During his time there, he once won top scorer of the season and also top scorer in a few tournaments. When he moved back to the United States, he joined the ECNL team (Alabama FC) and played two seasons with them making the playoffs both times. The side finished first place in the southeastern conference in 2020. Garcia featured as the team’s leading goal scorer both seasons as an attacking midfielder. In 2020, he was selected to train with Birmingham Legion’s USL first team as an amateur, and played in one game against Atlanta United.
Noonan on Garcia… “Marco was discovered this summer when he attended our elite camp and immediately set himself apart from 300+ players. He has a thirst and passion for the game that separates him from his peers.”