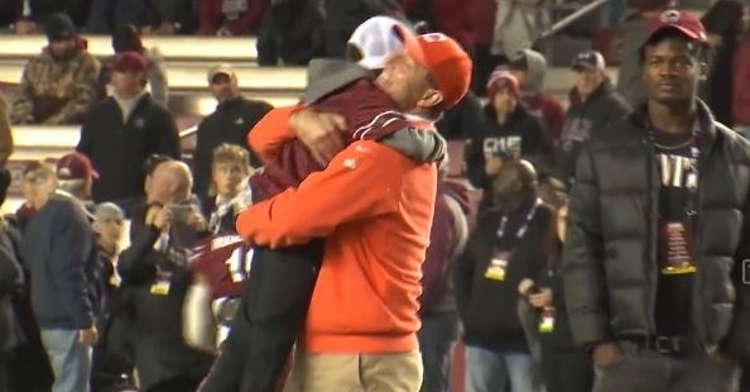 Coaches can be friends too.

Clemson's Dabo Swinney and South Carolina's Shane Beamer have been good friends for many years during their coaching careers.

Swinney told the media this week a fun story that Beamer's son Hunter was once a Clemson fan when Shane was an assistant coach at Oklahoma.

Swinney even gifted the youngster some Clemson gear after he asked the Clemson coach for some.

During Saturday's pregame, Swinney was able to see Hunter, and they shared a big hug on the field.

It's great to see Swinney and the Beamers get along as school rivalries don't necessarily have to get nasty and personal all the time. It's OK to occasionally hug it out.

Check out the video, courtesy of WSPA's Todd Summers:

As Dabo walked on to the field at Williams-Brice Stadium he went directly to midfield & picked up Shane's son Hunter & gave him a big hug.
Earlier this week Dabo talked about the time Hunter asked him for some Clemson gear & Shane said he hoped he no longer had that gear.@WSPA7 pic.twitter.com/2F1S8LNGtm