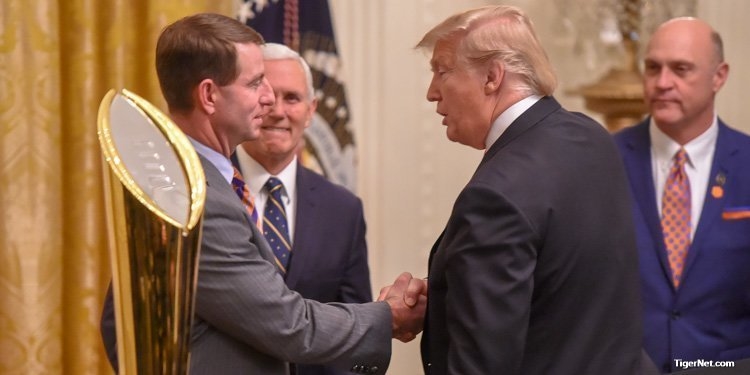 It was just over a year ago on Jan. 14 when the Clemson Football team had a feast of burgers and chicken sandwiches at the White House celebrating their title win.

The ACC Tigers were served a fast-food buffet which included McDonald's, Burger King, and Wendy's.

President Trump hosted the LSU Tigers on Friday and was asked about the Clemson team's visit last year.

"Nice guys, they were very large," he said about Clemson. "They kept eating and eating."

There you go, big guys eat a lot confirmed by the President.

“Nice guys, they were very large,” Trump says about the Clemson Tigers, recalling he fed them fast food at the White House last year after they won the championship. “They kept eating and eating.”

Got a big kick out of the graphics in this @washingtonpost analysis detailing the cost (and exact location) of all those burgers, fries and chicken nuggets for the @ClemsonFB celebration at the White House. Hilarious. https://t.co/l8KzvoQONI pic.twitter.com/rCxlGXg2Oi