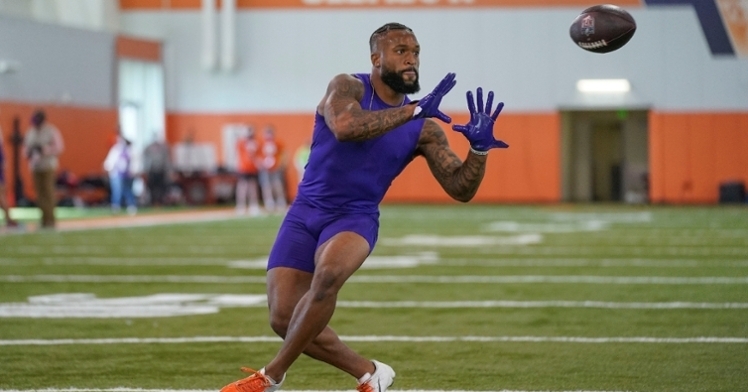 Rodgers is showing early what he can do for his new team. (Mark Hoffman/Milwaukee Journal Sentinel)

The Green Bay Packers opened up rookie mini-camp on Friday and former Clemson wide receiver Amari Rodgers got to work.

Rodgers was picked 85th overall in the third round of the NFL draft in late April. The All-ACC standout as both a receiver and a punt returner caught the eye of his new head coach on day one.

"He's a well-built kid," Packers coach Matt LaFleur said Friday. "He looks like a grown man. He's got that big running back, thick frame, and then you watch him run routes and he doesn't move like most traditional running backs. We're really excited about the versatility he can potentially bring to our offense and also his contributions on special teams."

The Packers were announced this week to start their season at New Orleans on Sept. 12. They are scheduled for their first preseason game hosting the Houston Texans on August 14.

Rodgers talks about his day one experience below:

"The energy level & the effort was outstanding."

It was a good first day at #Packers rookie minicamp.#GoPackGo pic.twitter.com/0vucXu9HSb