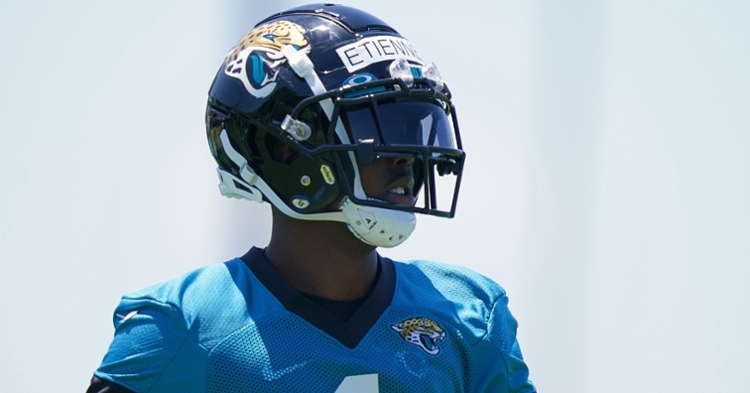 Etienne's ability isn't in question, but he may not have the opportunities to shine early.

Travis Etienne's offseason since a first-round selection has been a tad unusual, and some different factors could hold him back from a breakout rookie campaign according to one outlet

Out of the gates, new coach Urban Meyer has been trying to find alternate ways to get him the ball, working him out as a wide receiver in Jaguars mini-camp practices. He was picked 25th overall in the NFL draft this April as a running back, however, where he won two ACC player of the year awards.

But with Jacksonville's O-line in question and a 1,000-yard back in the stable already (second-year player James Robinson), NFL.com sees Etienne having the fourth-best impact among rookie RBs.

"Last season, the Jaguars ranked 15th in expected yards per rush (4.3), meaning their offensive line was about average on rushing downs," NFL.com's Cynthia Frelund said. "They took the fewest rushing attempts (337) and netted the fewest rushing TDs in the league (nine). It's still unclear how/when Etienne and James Robinson will be used, which isn't great for fantasy...Etienne doesn't rate higher in overall median forecasting because it's crowded in Jacksonville's backfield, not because his explosive talent doesn't warrant it."

Former Alabama running back Najee Harris tops the rookie RB list after being picked one spot ahead of Etienne by the Pittsburgh Steelers, with former UNC running back Javonte Williams next (Denver Broncos) and Ohio State's Trey Sermon after that (San Francisco 49ers).