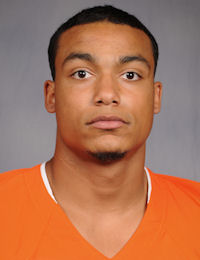 Buice was a red-shirt freshman running back on the 2011 football team. In October 2011 he decided to leave the football team and transfer to another school.

Before Clemson: Two-time finalist for Mr. Football in Alabama at Gaston High School...had 5,500 yards on 510 carries (10.8) in his career...had 66 carries for 671 yards and eight touchdowns as a freshman...had 196 carries for 2,281 yards and 44 rushing touchdowns as a sophomore...tied a state record with eight touchdowns in one game as a sophomore; his 47 overall touchdowns tied a state record...had 373 yards on 24 carries and another game with 338 yards on 16 carries...finalist for Mr. Football as a sophomore...had 177 carries for 1,650 yards and 25 touchdowns as a junior...finalist for Mr. Football and A Back-of-the-Year as a junior...had an injury-plagued senior year; he missed eight games...had 897 yards on 71 carries and 14 touchdowns as a senior...#40 running back in the nation and #17 player in Alabama by Rivals.com...#69 running back in the nation and #18 player in Alabama by Scout.com...#61 running back in the nation by ESPN.com...#18 player in Alabama by SuperPrep...All-Southeast Region pick by PrepStars...helped his team to a 12-1 record as a junior and an appearance in the state title game...from same hometown as former Clemson Head Coach Danny Ford...coached by Swane Morris at Gaston High School...recruited by Charlie Harbison...chose Clemson over Kentucky, Mississippi, and Tennessee...born Dec. 7, 1991.