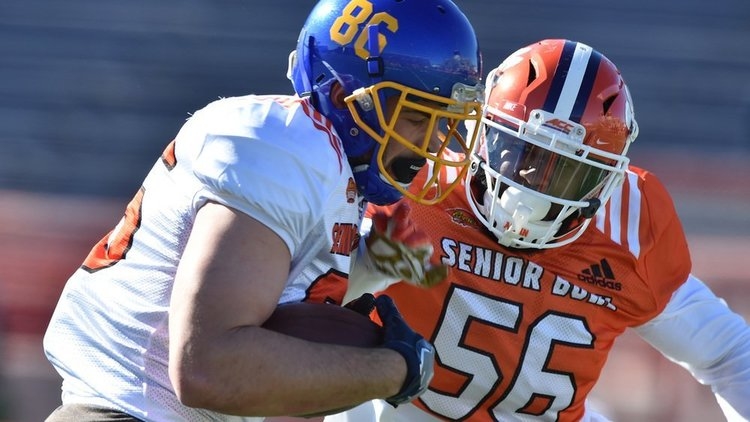 Dorian O’Daniel showcased what made him an All-American at the Senior Bowl this week, but he will be missing out on the final practices and game due to injury (ribs), per NFL Draft Scout analyst Dane Brugler.

O’Daniel, who is rated as the No. 1 OLB and a top-30 prospect by CBS Sports, wanted to use his week in Mobile, Alabama to showcase what he can do, and by all accounts, he accomplished just that.

“Just the competitor I am,” O’Daniel told HoustonTexans.com. “What I’m able to do on the field. The energy I bring. I bring versatility, athleticism, speed. Being who I know I can be as a player. Ultimately, just having fun.”

Draft Analyst’s Tony Pauline said O’Daniel, who weighed in at 215 pounds this week, looks likes a safety and has the skills of one too.

“During drills on Wednesday and later in scrimmage, O’Daniel shut down every tight end or running back he was asked to cover,” Pauline said. “Most impressive was the way he runs with opponents, tracks the ball in the air and defends the pass.”

CBS Sports analyst Chris Trapasso said earlier in the week that O’Daniel picked up on his roles in drills quickly.

“Early in the session, he flew past a running back in a blitz-pickup drill,” Trapasso said. “After that, he defended two passes and air-tight coverage forced another incompletion. In 11-on-11 drills, he filled his run fits quickly and had a few tackles near the line of scrimmage. O'Daniel has the athletic makeup and the nuanced skill to thrive in today's NFL.”

The Olney, Maryland product was a finalist for the Butkus Award, making first-team All-America from Sports Illustrated and Bleacher Report.

Next up for O'Daniel and Hearn will be waiting on NFL combine invites in hopes of competing in Indianapolis against the best prospects Feb. 27-March 5.

Another clip: Dorian O’Daniel beat all the running backs like a drum in pass pro drills. He’s looked good. pic.twitter.com/uFd7o6PFIA

Spoke with Dorian O'Daniel. impressive young man. I think he's had a nice week so far and he wasn't initially invited. Making the most of his opportunity