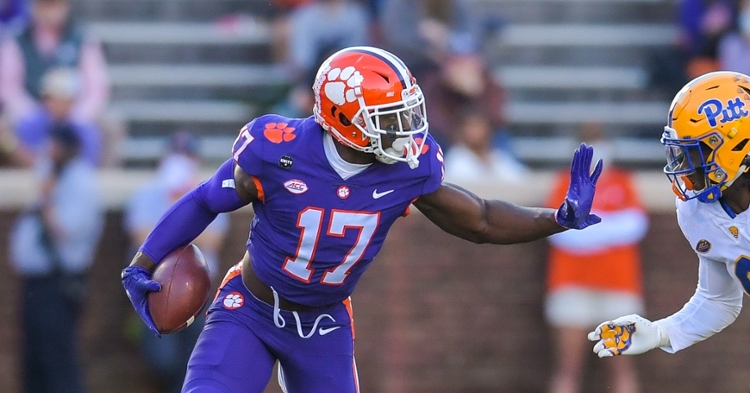 Powell set a series of career highs in his last campaign as a Tiger to bolster his pro stock (ACC photo).

Former Clemson wide receiver Cornell Powell was selected with the 181st overall pick in the fifth round by the Kansas City Chiefs on Saturday.

Powell is expected to round out Clemson's NFL draft entries with five total selections, and all five being on offense gives that side of the ball Clemson's most picks there in the seven-round era of the NFL draft (from 1994-on).

As part of a team with five ACC titles and CFP berths, as well as three national title game appearances and a national title win, Powell finished with 93 receptions for 1,211 yards and 10 touchdown catches in 1,207 snaps over 54 career games (12 starts).

He was rated as a four-star prospect out of Rose High in Greenville, North Carolina.

Spotrac estimates a rookie deal worth $3.7 million with $240,000 as a signing bonus for Powell.

What a day for @CornellPowell17. The former @JHRoseAthletics star turned @ClemsonFB receiver was drafted 181st overall by the @Chiefs today in the fifth round.

-Became the 69th player to have played for Head Coach Dabo Swinney to be drafted into the NFL, including the 14th fifth-round pick of Swinney’s tenure.

-Became the 12th wide receiver in Swinney’s head coaching tenure to be drafted into the NFL.

-Gave Clemson multiple wide receivers in a single draft for the third time in the Swinney era, joining 2014 (Sammy Watkins and Martavis Bryant) and 2018 (Deon Cain and Ray-Ray McCloud).

-Became the first No. 181 overall pick in Clemson history.

-Selected in the same round (fifth) and same division (AFC West) as former Clemson teammate Hunter Renfrow, who was a fifth-round pick of the Raiders in 2019.

Head Coach Dabo Swinney: “The Chiefs are getting a young man of commitment and perseverance, a young man that has finally put it all together and is just hungry to go continue he finished his career with last year. There is a drive and hunger to him that I think is special. It is fun to see a guy that finally puts it all together, whether it be overcoming injuries, opportunity or the technical aspect of the game. He did that. It has been fun to watch him. He is physical. He has got a great body. He is a big, strong kid that can play multiple positions. Same thing as Amari Rodgers — he really handles himself well and really understands the nuances of playing receiver as far of the technical aspect of his stance, his starts, the releases, and break points and influence in his route running and so forth. They are getting a guy that has a confidence to go with the talent. I am excited about him because his upside is higher than the round where he was drafted. So I am excited for the Chiefs because I think he is the guy that is going to be able to help early. Same thing as Amari — he has a lot special teams’ value. He can return, he can cover kicks, he can play gunner. He is going to bring a lot to the table. And I think he has got an NFL-ready body right now. But his best football is still in front of him. The light has come on bright for him. There is a hunger, and again, there is a spirit of confidence to him that I think will separate him on this next step.”

Wide Receivers Coach Tyler Grisham: “Cornell is a great prospect that I really think it just scratching the surface of his potential. He really came on his senior year here at Clemson and stepped up when we needed him most. The thing about Cornell is he’s a versatile player because he has good height, but his length makes him play longer and bigger than he really is, so he can go up and make the contested plays. He also can run good routes because he is a 6-foot-1 or so guy who can get in and out of his breaks really well and create separation. Because of his length, he can use his physicality and strength to create separation and to also hold up in the run game, block well and also contribute on special teams.”

Congrats to @arodgers_3 & @CornellPowell17 on being selected in the #2021NFLDraft! Phenomenal players and men that will make an impact for their franchises and community. That’s TWO MORE WRs drafted @ClemsonFB family! The tradition continues! pic.twitter.com/GCumV3OUhN

Y’all better not be sleeping on @CornellPowell17??

What team do you want to see pickup Cornell in the @NFLDraft? ??pic.twitter.com/SgRgPPF049

So proud of you @CornellPowell17!
Thank you for your perseverance and grit to stick it out, stay focused & prepared, and perform when it mattered most. The best is yet to come for you!