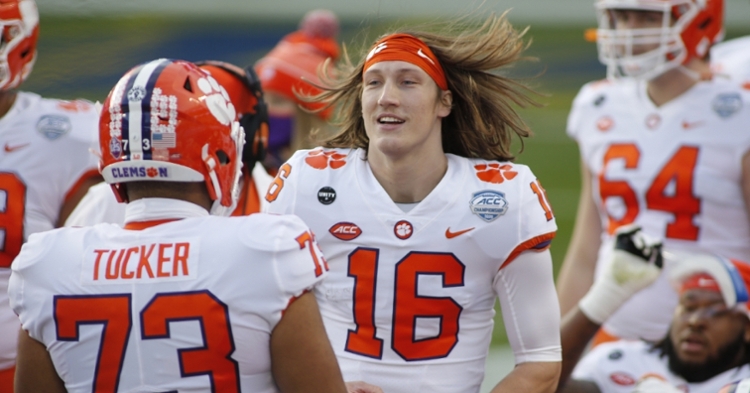 Lawrence says he's ready to take the next step in his journey.

Lawrence was the No. 1 overall selection by the Jaguars in the 2021 NFL Draft. NFL Commissioner Roger Goodell made the announcement in Cleveland, Ohio – the site of the draft – shortly after 8 p.m. Thursday.

Clemson won the national title following his freshman season, when Lawrence was named Offensive Most Valuable Player for his performance in a 44-16 victory over Alabama.

Lawrence completed 758 of 1,138 passes for 10,098 yards and 90 touchdowns with 17 interceptions in three collegiate seasons, throwing for 3,153 yards and 24 touchdowns as a junior this past season. He also rushed for 943 yards and 18 touchdowns for Clemson.

"Pretty surreal," Lawrence told ESPN's Marty Smith on the draft telecast from Seneca, South Carolina, shortly after being picked. "Obviously this has been the dream for the past few years. And like I've said, I didn't even dream this as a kid, so [it's] really special and just having all the people that I care about here watching, it's really hard to explain.

Jags head coach Urban Meyer, general manager Trent Baalke and owner Shad Khan never told anyone they were going with Lawrence as the top pick, but there was very little drama heading into the evening.

“No negatives,” Baalke said recently. “All the research we’ve done, you’re always looking for the stars to align when you’re looking at prospects, whether that be from a physical, mental, character aspect, whatever the case may be. With his situation, like many others in this draft, the stars all align and that’s what you’re looking for.”

This was the first time in franchise history the Jaguars held the No. 1 selection. They previously had selected No. 2 overall three times, selecting offensive tackle Tony Boselli No. 2 in 1995, linebacker Kevin Hardy No. 2 in 1996 and left tackle Luke Joeckel No. 2 in 2013.

Lawrence said he is relieved to have his next step planned out.

“It was just a kind of a weight lifted off my shoulders,” Lawrence said. “I’m going to do everything in my power to get us back to where we need to be. I’m going to put in the work. No one’s going to work harder than me.”

He then said that he doesn’t expect to be the day-one starter and that he wants to take the success he's had to Jacksonville.

“My mindset always going in is I’m going to earn everything that I get,” Lawrence said. “I don’t have any expectations for anything other myself. I’m not expecting anyone to hand me anything. I want to come in there and earn the respect and trust of my teammates and the right to lead the team. That's the plan moving on to Jacksonville - just to continue to do things that haven't been done and continue to lead and do things the right way."

QB @Trevorlawrencee finished his @ClemsonFB career with a 34-2 record, the third-best winning % by a starting quarterback with at least 30 career starts.

"He can do [it all] and his best traits are his leadership ability and ability to connect with teammates." - @BuckyBrooks pic.twitter.com/5JqfyjodiK

LETS GOOOOO!!!!!!! So excited to be in Jacksonville. The best is yet to come. #DUUUVAL

Trevor Lawrence is the No. 1 pick in the 2021 #NFLDraft@ClemsonFB | @Jaguars pic.twitter.com/lKYCbs6nZa