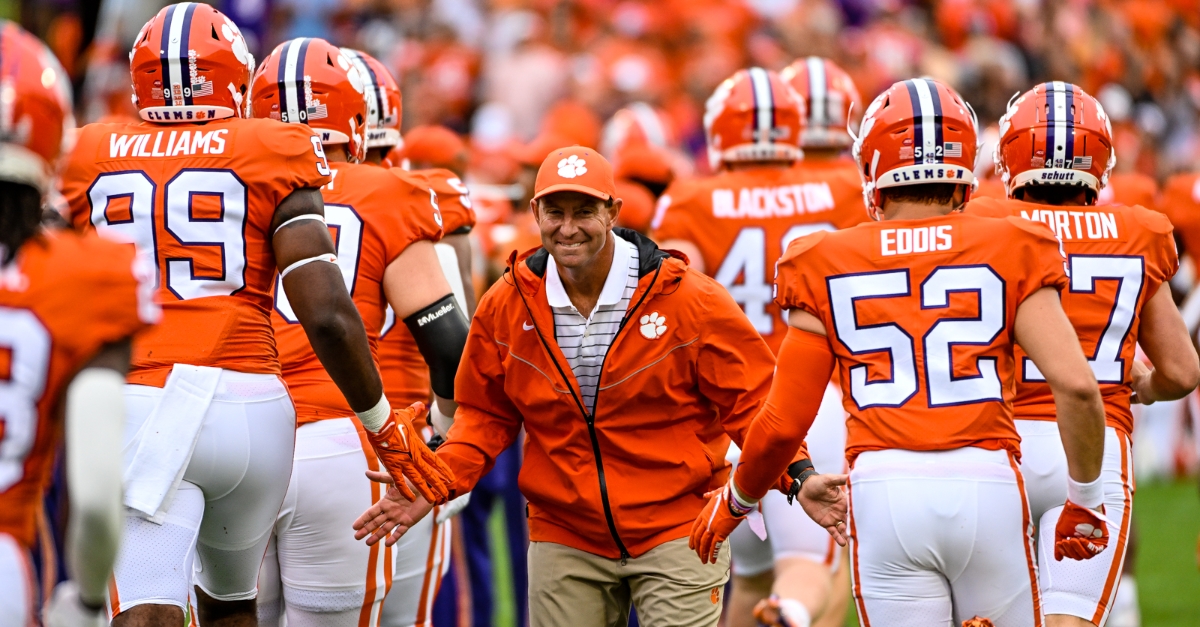 CLEMSON – Clemson head coach Dabo Swinney didn’t offer any details on his long list of injured players, but did say that he is hopeful that several of those injured will be able to play Saturday. Which players? We will find out when the team releases the availability list prior to the game.

No. 5 Clemson takes on No. 21 Wake Forest in Winston-Salem at noon Saturday in a key ACC Atlantic Division matchup. The winner will effectively have a two-game lead within the division.

How healthy will the Tigers be?

"We are in a better spot. We won't put out an availability list until Saturday (prior to kickoff). We're in a good place,” Swinney said Wednesday during his weekly press conference. “We have some guys who may be game-day type decisions. Right now we like where we are."

That includes defensive end Xavier Thomas, and Swinney was once again cagey with his answer on whether Thomas would play.

Swinney then said the Tigers are excited about the opportunity ahead.

"We're excited about our first division road game. Each game is critical,” Swinney said. “To be able to go on the road and win is what it takes to win the league. Our goal is to win the division. This is a huge, huge, game for us. It's two good teams. We're both improving. Both want the exact same thing. It comes down to being able to execute.

"Wake is an outstanding team. Dave Clawson is a friend. I've probably spent more time with Dave than any other coach over the last three years ... a lot of phone calls, conference calls, zoom calls. He's one of the great people in the profession. They evaluate well, teach, coach and develop well. It's one of the more veteran teams out there. It's the most veteran team he has had. Rarely does Wake beat itself. You have to beat them. You have to be disciplined. It starts with the guys in the trenches.”

The Demon Deacon offensive line has experience across the board, a key factor on both sides of the ball.

"Their offensive line, they have played a million snaps. They rush the passer defensively,” Swinney said. “Their linebackers are really good. They've always had one of the better secondaries that we see. They challenge you and play with good technique. Safeties are good tacklers and aggressive. This is a complete football team. Dave has had these guys rolling. They've been to a bunch of bowl games. They won the division last year. You don't get lucky and win the division. They have good skill at receiver, really elite. Both backs are outstanding. The third back had a good day on us last year.

"It'll be our first noon game. We're super excited. I'm sure it'll be a great crowd. Our guys are excited about the challenge and opportunity to stay in control of our destiny. We'll have to play well. We'll have to play our best game to this point."

On why Dacari Collins is transferring

"I don't think he liked where he is on the depth chart. It's 2022. That's not much of a story anymore to me, to be honest. It's going to be an every year deal in college football. Great kid, really talented and has a bright future. He just has to continue to mature and grow. Nothing negative. He loved his time here and appreciated everybody. Guys aren't patient much anymore. That's the world we live in. I wish him well. We'll keep moving."

On Bryan Bresee handling the death of Ella

“It's been a long journey. He was in the hospital with his sister for four straight days, all day everyday and then the closure that came with yesterday. This will be something he'll deal with the rest of his life. He has a great support group and an amazing family. I think Ella, just her words and joy, the things she wrote, hopefully they can all take some peace from that. I know he is looking forward to getting back with his teammates."

On the heroics of App. St. QB Chase Brice in win over Troy

"I called him and told him we need to go to Vegas right now. His comment was winners win and that's Chase to the core. I'm proud of him. He's a great young man and has become a great leader. They all believe in him. He just finds a way. That's who he is. I love that guy. He's a good one."