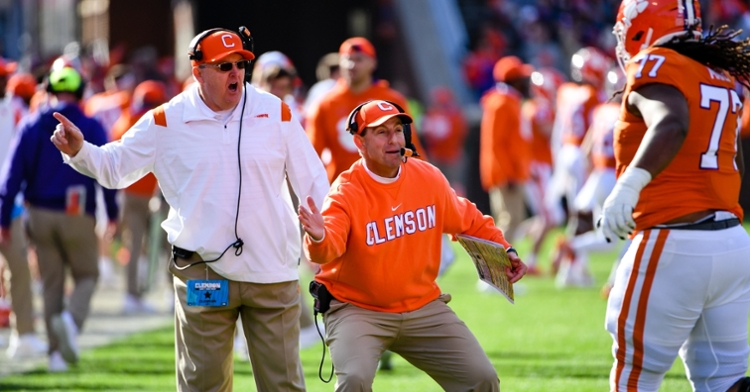 Swinney challenged the coaching staff ahead of the win over Wake Forest.

CLEMSON – Head coach Dabo Swinney challenged his coaches last week to be better coaches and better leaders for their position groups, especially on an offense that boasts youth across the board. That challenge worked as the Tigers played their best game of the season in a 48-27 victory over No. 10 Wake Forest.

Offensive coordinator Tony Elliott smiled Monday when he was asked what that conversation with Swinney looked like.

Elliott then said that the coaches knew that, on paper, the game against Wake Forest shouldn’t be a contest.

“He’s very passionate, very intense,” Elliott said of Swinney. “Honest, he tells you the truth. It was a lot of that and it was a big challenge that hey, the game comes down to coaching, when you’re talking about us vs. Wake Forest. Because on paper, it shouldn’t be a contest, when you start looking at the recruiting rankings for the schools.

“It's really on us to get us our guys to play better than their guys. And that's physically and mentally and have the right emotions and channel the emotions the right way. That is what the challenge was this week for us coaches. That is the challenge every week, but in particular for this game when you just put it all on the table and saying what is it going to take for us to win? And he felt like he wanted us to do the best job of helping our players.”

Elliott said that those conversations were good for the coaches with a little less experience – wide receivers coach Tyler Grisham is in his second year and running backs coach CJ Spiller is in his first year.

“I think there are guys that are learning every single day, and I am really proud of Grisham and CJ and their growth this year,” Elliott said. “Those guys have done a tremendous job. We talk about the offensive line but look at what Grish has had to do every week, too. He has guys up and down and is trying to rotate guys through three spots and we don't know who is available, but he continues to find a way to get those guys to improve. It's definitely necessary for those guys, and then, too, to build confidence. These guys need us, especially with the youth on the offensive side of the ball, they need our leadership at certain times and we have to foster and grow leadership.

"He (Swinney) does it (challenging coaches) every week but it was more intentional this week to make sure we understood.”