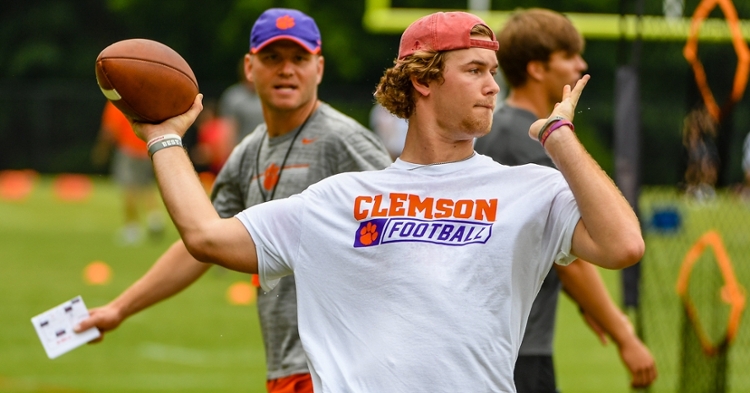 The heat and sun arrived just in time for the start of the fourth session of Dabo Swinney’s camp, and luckily most of the excitement took place indoors with the quarterbacks.

I’ll start with a few team-related nuggets (because it’s so good to be back out doing football things). I was talking to one person on staff who said that while the rest of the country may think they know what Clemson has on defense, at quarterback and wide receiver, no one outside of the building understands what the Tigers have in CJ Spiller’s running backs room.

Freshman Will Shipley, who was impressive during spring practice, has been working with the running backs the first few days of camp, and it doesn’t seem like it’s been two years since we saw him and Phil Mafah working out in the same group for Tony Elliott. At the time, I didn’t know if Clemson could land one of them, but the Tigers and Elliott landed both. They will have to battle for playing time (I am telling you, Kobe Pace is gonna be a star), but this will be fun to watch this year. Add that to what I’ve seen out of the tight ends who have been working the camp and the offense as a whole should be fun to watch. Just have to keep DJ Uiagalelei upright and healthy and the offensive line has to play better.

It’s also fun to watch Coach Swinney coaching the wide receivers – his passion – but now two his sons are coaching as well. Will Swinney and Drew Swinney have donned whistles for the camp, and I watched Drew for a little bit this afternoon. He has a lot of his dad in him.

Clay Swinney plays wide receiver at Daniel and ran routes yesterday (he was riding around with Jim Phillips, Dabo’s coach from back in Pelham, today), and I told him I think he’s the best athlete of the bunch.

Now onto the recruiting bit, which is what you really want to read.

*The one notable defender working out this afternoon was in-state prospect Xzavier McCleod, a 2023 4-star defensive tackle out of Camden. The 6-5, 290-pounder was what I expected, shows flashes of quickness for a young man his size, and good hands. The best thing was his ability to take coaching – he was getting coached hard during the time I watched, and while some kids tend to look away or act distracted, he was respectful and took it all in.

*I went inside to watch the quarterbacks and talked to one coach who is on a two-week circuit with his quarterback. One thing he said stuck with me – he said his quarterback “probably isn’t good enough to play at Clemson” but that Louisville, Wake Forest, NC State, and Tennessee are all interested. He laughed and said, “With Trevor and DJ, Clemson has kind of set the template for what they want their quarterbacks to look like.”

*The main group throwing this afternoon included a few holdovers from this morning, including Judah Holtzclaw out of Westerville (OH) Westerville Central. Holtzclaw is a 3-star 2022 prospect who has some smaller offers – Air Force, Columbia and Penn. So what stands out? He’s 6-6, 230 and has a strong arm, and it appears he’s growing into the position.

Westerville is scheduled to play a Top-10 nationally-ranked schedule this year, including IMG out of Bradenton (FL). Holtclaw camped at Georgia Wednesday and apparently the Georgia coaches told him they liked his size and potential and floated the idea of a grayshirt. His dad told me that his recruiter is Robbie Caldwell, and they asked Caldwell two weeks ago if there was any need to come down and Caldwell said yes, that Clemson’s QB situation was in flux and they wanted to see him in person. So a group of Westerville prospects were on hand for the camp (including some receivers). I asked his dad if Clemson – which still might not be sure about 2022 numbers and has Cade Klubnik in the fold – were to offer the same deal would he take it, and he said yes. Bears watching to see what happens, like a grayshirt or preferred walk-on.