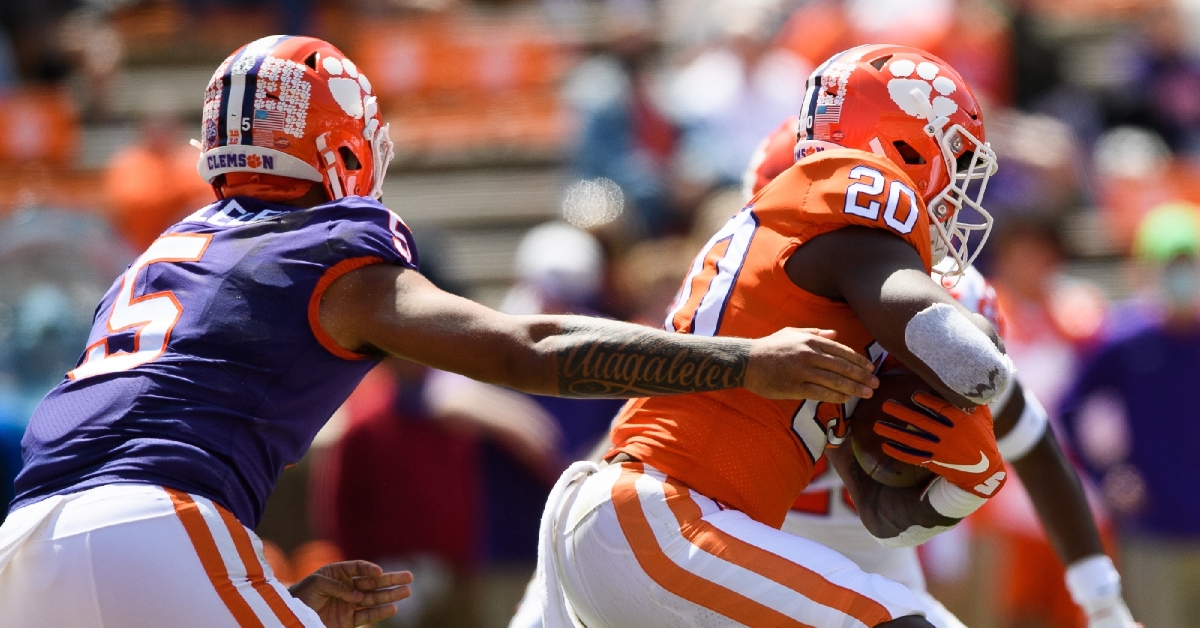 Uiagalelei and Pace were two of the standouts in the spring game. (Photo by Ken Ruinard/ACC)

CLEMSON – The annual Orange and White Game wasn’t high-scoring and it wasn’t explosive, but you can’t beat a breezy, sun-splashed afternoon in Death Valley.

The Orange scored the first touchdown of the game on the very first drive but failed to find the end zone after that as the White scored twice late to secure the 14-13 win.

Here are some of my takeaways as I watched the game from the press box.

*We’ve heard all spring that RB Mikey Dukes has excelled in the return game, and he broke off a nice return to start the game.

*RB Kobe Pace jumped outside and then ran over a defender, taking his first carry 26 yards. He then added a 15-yarder and a 9-yarder on the first drive. He’s a candidate to start at RB, and he didn’t disappoint.

*The Orange scored on a 14-yard pass from Uiagalelei to Beaux Collins for a quick 7-0 lead. The two were teammates at Bosco in California.

Orange starts the game with an 8-play, 73-yd drive capped by a TD catch from freshman Beaux Collins! pic.twitter.com/h5vgdRzkxt

*On the second possession for the Orange, DJ Uiagalelei pitched the ball behind Pace. Pace tried to grab it but fumbled it forward, where it was picked up by corner Sheridan Jones. Uiagalelei lowered his shoulder and made the tackle on the sideline, not what you want to see with not a lot of quarterback depth.

*On the third drive for the Orange, Uiagalelei escaped the pocket and threw an incomplete pass to Joseph Ngata. Ngata looked like he broke off the route too soon, but the most noticeable thing about the play was that the pass was a laser. Thirty yards on a frozen rope.

*On the third drive by the White, Phommachanh threw a dangerous pass into the flat and freshman corner Nate Wiggins broke on the ball and almost intercepted it. Wiggins has drawn rave reviews all spring and might just push for immediate playing time in the fall. With the secondary down in numbers, Wiggins has had a chance to shine.

*Freshman DE Cade Denhoff almost had a lineman’s dream. With the Orange backed up close to the end zone, he read the screen and almost intercepted the pass of Hunter Helms. If he could have held onto the ball, he would have walked in for the score. Denhoff has to put on weight, but there is no doubting his explosiveness.

FIRST QUARTER MVPs: Orange is Kobe Pace, with 6 carries for 69 yards. White is punter Will Spiers, with two for 89 yards.

*Phommachanh threw a great pass early in the second quarter, hitting Ajou Ajou on a crossing route that covered 16 yards. It was his best pass of the day. Two plays later, he threw a ball up for grabs down the left sideline and with safety RJ Mickens playing centerfield, Mickens stepped in for the easy interception.

*Davis Allen looks like he is putting it all together. He can block and he is now running routes with precision. But I’ve also liked what I’ve seen out of Jaelyn Lay today. The forgotten man in many ways, the 6-6, 270-pounder looked good.

*Hunter Helms is playing for both teams and has looked good in spurts. The question you have is this, and it goes back to how thin the Tigers are at that position right now: Do you trust him to go on the road and beat Pitt at Pitt or Louisville at Louisville? Lots of questions to be answered between now and fall camp.

*Lyn-J Dixon broke off a nice 21-yard run late in the second quarter. There is no doubting his burst. You have to figure it’s a two-way battle between Dixon and Pace to start, with Chez Mellusi knocking on the door. That will be a fun battle to watch in August.

*Corner Andrew Booth one-handed an interception on the sideline late in the second quarter but it was ruled incomplete (replay showed otherwise). He had a similar interception last year and comes up with these freakishly athletic plays. If he can gain consistency, he’s an All-ACC performer.

*DT Bryan Bresee is so much fun to watch. He is hard to block, and he looks like he’s gained so much more confidence after last season. He and Tyler Davis are going to be a force in the middle. The big question is how many pressures and sacks he will have from that tackle spot.

* Ngata has had a couple of nice catches today. One in traffic and one just now on the sideline in the two-minute drill where he had to make a leap on the sideline. If he’s healthy he can be a force. Staying healthy is the key.

*Lay continues to make plays. Like I said, we haven’t heard a ton about him this spring but he looks like he can be a force.

*BT Potter hits the 54-yard field goal with 31 seconds remaining in the half to five the Orange a 10-0 lead.

SECOND QUARTER MVPs: Orange is a tie between Lay (5 catches 54 yards), and BT Potter (54-yard field goal); White is safety Tyler Venables, who had three sacks in the second quarter.

His career-long in regular season is 52 yards. pic.twitter.com/Fw8UZkFfa2

*It’s obvious that many of the starters are done for the day. Will Swinney is catching passes and people I’ve never heard of are lining up at running back. Helms has a pass batted in the air and it’s intercepted by Sergio Allen.

*Midway through the third, Ngata with another great grab, this time covering 49 yards (the longest play of the day) from Uiagalelei. The throw was perfect, and Ngata went up over the defender to high point the ball and come down with it on the sideline. Ngata showed strong hands there.

*Later in the drive, it looked like Dukes might get loose inside the five, but Vonta Bentley delivered one of the best hits of the day. The pop could be heard all over the emptying stadium.

*Potter nails another field goal, this one from 24 yards out, for the 13-0 lead for the Orange.

*We finally have a Phil Mafah sighting. He rumbles 18 yards for his first carry. He juked one defender, then stiff-armed another. And just like that, with the running clock, the third quarter is over.

*Phommachanh with another gorgeous pass, this time to Ajou for the touchdown. Ajou broke behind the defender at about the three and Phommachanh laid it perfectly in Ajou’s hands in the end zone. The play covered 16 yards and was the first score of the day for the White team. Hopefully, that gives him some confidence heading into the summer.

White Team gets on the board with a beautiful throw-and-catch from Taisun Phommachanh to Ajou Ajou! pic.twitter.com/0omCfbR85z

*Dacari Collins with a nice reception in which he broke several tackles. His size can be a difference maker.

*Ajou and Booth makes for a fun matchup to watch. Those two have gone head-to-head a lot of the day, and they’ve talked and had fun. Ajou helped out Phommachanh late in the quarter – Phommachanh was flushed from the pocket and just as he approached the line of scrimmage dumped it off to Ajou. This one covered 18 yards. The reception gave Ajou 102 yards on the day on six catches.

Phommachanh then went down late in the game with what head coach Dabo Swinney said might have been a cramp (Swinney later said in his postgame press conference that it was likely a torn Achilles). He wasn’t sharp early but looked better as the game went on.

*Defensive tackle Tre Williams started to flash late, and even got a sack on Uiagalelei with about 100 seconds left on the clock. After a timeout, it was Xavier Thomas bursting through for the sack.

*There aren’t a lot of “big” takeaways from this one. The offense was very vanilla and it was obvious that Clemson wasn’t going to show anything new to Georgia. It was a game plan designed to get guys some work, get people on film, and head into the summer healthy. Clemson’s bread and butter is the RPO game with the QB run, and with it being a game of tag for the quarterbacks, that is essentially off the table.

One huge takeaway is this, however; Brent Venables and the defense got worked by Ohio State, and there has been a different intensity this spring. This group will be athletic and big and nasty. One writer who covers another program watched and sent me a text and said, “That will be the best defense in the country.”

Phil Mafah punches it in and White takes the lead! pic.twitter.com/FaJjtRfBBS

Let’s give that to Ajou Ajou for the offense, with his six catches for 102 yards and a TD. On defense, safety Jalyn Phillips had nine tackles and broke up the last pass of the game to secure the win.

DJ Uiagalelei did a good job despite the limitations and finished 20-for-28 for 174 yards and a score. Defensively, Jake Venables had nine tackles with a sack and 1.5 tackles for loss.