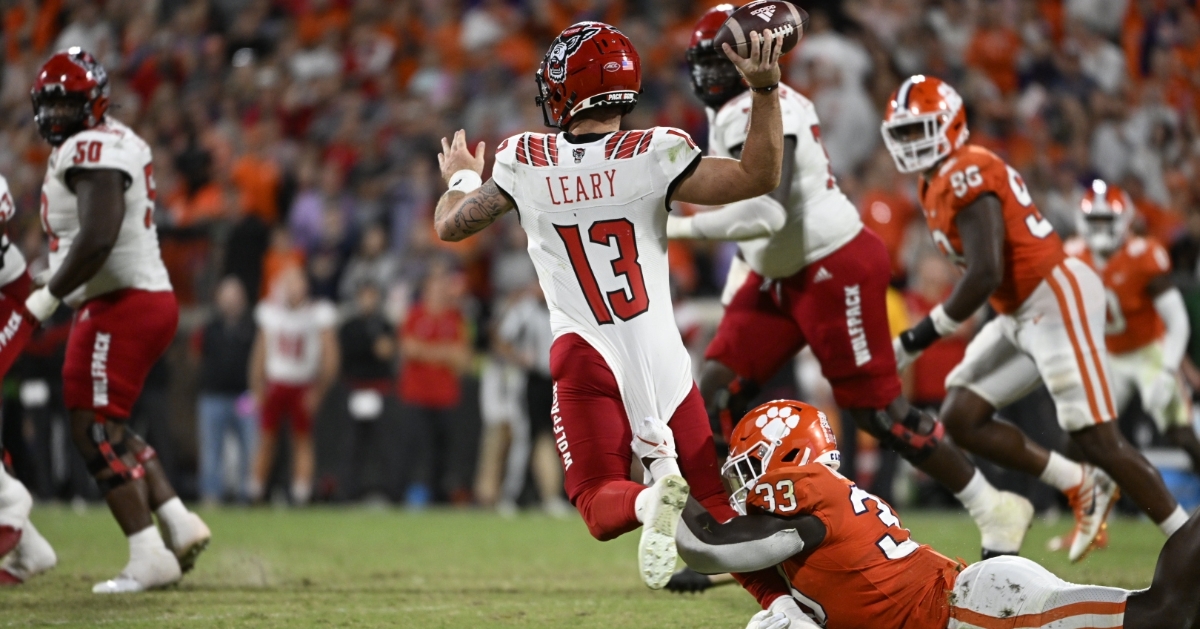 The No. 10-ranked NC State Wolfpack came into Death Valley saying all the right things and believing they would take down fifth-ranked Clemson.

Instead, they walked out with a 30-20 loss – their first of the season – a little bit of heartbreak and a little bit pissed off.

Wolfpack quarterback Devin Leary met with the media following Saturday’s game and said there’s a lot of hurt and anger in their locker room.

“Heartbroken. Honestly, a little bit of heartbroken and a little bit of pissed off just because we walked off that field knowing that we didn’t play to our best ability,” Leary said following the game. “We had very high aspirations, high expectations going into this game. We thought we prepared well, but we didn’t execute well. We didn’t play to the best of our ability. Guys are hurt, but at the same time, you see guys walking around saying ‘we’re going to bounce back.'”

Leary said Saturday’s loss to Clemson was a missed opportunity and simply because of a lack of execution.

“Winning here, the last 36 teams that have tried didn’t get it done,” Doeren said. “We would have had to play a lot better than we did tonight. You’ve got to give Clemson credit. They won the line of scrimmage. Their D-line played really good. I thought they had a good game plan. Defensively, they played a lot looser in the secondary and made it hard for us to run by them. And their D-line pressured us.

“We had some opportunities right before the half to walk in with the lead and get the ball back, and we had a coverage breakdown that led to [Will] Shipley’s play. We had a chance at an interception that we dropped, and then they scored. That was a big possession for them because we took the lead on the series before. That was a hard-fought game, and Clemson out-played us. And obviously, that means they out-coached us today.”

Doeren said his team didn’t play up to their standard.

“This was a good football game with a good team on the field. We didn’t play our best. I think we’re a really good football team. But they were better than us today. That’s where we’re at,” Doeren said.

However, Doeren thought the Wolfpack ‘gave’ Clemson the game at times Saturday night.

“It was there, for sure. I feel like we gave them a touchdown going into the half,” Doeren said. “I really feel that way. Not to discredit Clemson. They made a nice throw and catch. But we were in a three-deep with two hard corners, and they run a flat route; the corners should be all over that. That should never have been caught by (Will) Shipley. That got busted right there. The cornerback had his eyes in the wrong spot. You can’t do that and win games like this. You don’t have to be perfect, but you have to play the defenses and offenses and execute. Make your layups, and don’t turn the football over. We didn’t do that well enough.”

Despite the loss, Moore said all NC State’s goals are still in front of them.

“It’s a big, missed opportunity for us,” Moore said. “We realize that. But we’ve still got a long season ahead. There’s a lot at stake. But this one hurt. We had an opportunity to continue to be in the driver’s seat, and we missed out on it.”

Doeren agreed, saying his team just needs to look ahead to Florida State and let the chips fall where they may.

“We go to the next game,” he said. “We can’t sit here and say ‘what if?’ It’s a long season. There’s a lot of games left. All we can control is next week. We have to focus on getting ready for Florida State, taking it one game at a time, and seeing where we end up.”