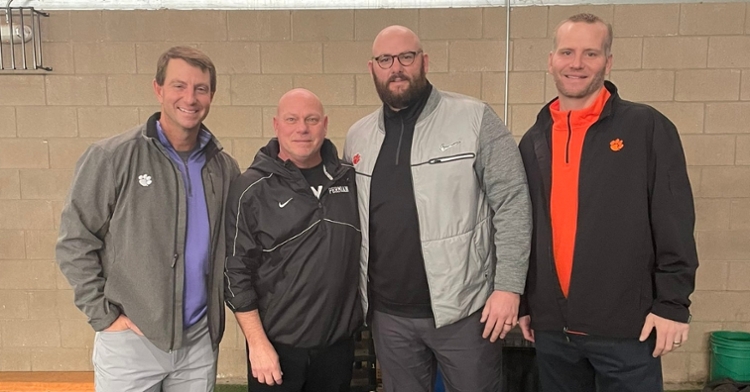 Clemson coaches pose for a picture at storied Permian Monday.

Clemson’s coaching staff is making itself right at home in the big state of Texas.

Head coach Dabo Swinney has been posing for pictures in the Lone Star State early this week as the Tigers put the finishing touches on the 2022 recruiting class and lay the groundwork for the 2023 and 2024 classes.

Monday, Swinney posed for a picture with former offensive coordinator Chad Morris, who is now the head coach at Allen High School. Swinney stopped in at Allen to not only see Morris – the two are still friends - but also to check in on 2023 5-star defensive lineman DJ Hicks.

Earlier, the coaches had stopped in Coppell (TX) to check in on 2023 4-star cornerback Braxton Myers, who earned a Clemson offer last week. Myers is a consensus top-150 national prospect according to the major recruiting services who is ranked as high as the No. 100 overall prospect in the 2023 class, per the 247Sports Composite rankings.

Myers hopes to be in Clemson this weekend for Elite Junior Day.

“I plan to go to Clemson on the 29th for the Elite Junior Day Retreat,” Myers told TigerNet. “And hopefully after that I come up with a top ten (schools list) somewhere around February. And then probably a top-five somewhere in April. And then check on my officials. And then hopefully commit by the end of summer.”

What would it take for Clemson to make sure it has a spot in his top-ten?

“Just the relationship with Coach (Mike) Reed that I've already built from previous years,” Myers said. “I think they already are in my top ten. Just being able to see all the coaches again. Just be cool. And see other recruits there. Just have a good time.”

The coaches also stopped in at one of the more storied programs in the state when they dropped in on 4-star 2023 offensive lineman Harris Sewell of Odessa (TX) Permian. Sewell is a consensus top-100 national prospect according to major recruiting services, who is ranked as high as the No. 69 overall prospect in the 2023 class, per the 247Sports Composite rankings.

In addition to his Clemson offer, the 6-foot-4, 290-pound Sewell also has an offer from Alabama to go with more from Baylor, Auburn, LSU, Michigan, Notre Dame, Oklahoma, Ole Miss, Oregon Texas, Texas A&M and Southern Cal, among others.

Tuesday, the coaches made their way to see 2022 running back Andrew Paul of Dallas (TX) Parish Episcopal. Paul has a Clemson offer, was on campus last weekend for a visit, and is the top running back target for this cycle. It is interesting to note that Georgia offered Paul shortly after the Clemson visit.

For the season, Paul rushed for 2,616 yards and scored 44 touchdowns. He earned first-team all-state honors and was named his district's Most Valuable Player.

I wrote a few weeks ago that Georgia is putting a stranglehold on talent in the Peach State, a state that Clemson used to great advantage for years. However, with the Bulldogs’ recent success on the recruiting trail, the Tigers have had to look elsewhere for talent and Texas appears to be a hot spot. There is no denying that high school football is king there, and talent abounds.

Swinney hadn’t dipped into the state of Texas until 2016 when tight end JC Chalk came on board. With the signings of Klubnik (2022), Andrew Mukuba (2021) and R.J. Mickens (2020), Clemson has now signed a player from Texas in three consecutive classes for the first time since 1989-91. Klubnik is the first Texas quarterback signed by Clemson since that 1989 class (Harlingen’s Garth Fennegan).

Expect those numbers to multiply as the Tigers continue to make inroads in Texas.