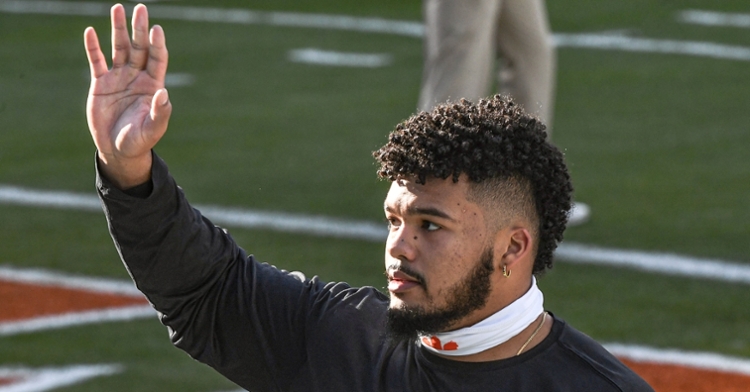 Carman is headed home to play in Cincinnati.

Carman, the mammoth left tackle who started 27 games over the last three seasons for Clemson, heard his name called during Friday night’s second round of the NFL Draft, and he couldn’t be happier with his destination.

Carman heard his name called early Friday night as the Cincinnati Bengals picked him No. 46 overall in the second round of the 2021 NFL Draft. Carman hails from Fairfield, Ohio, a short 30-minute drive up the interstate from Cincinnati.

"I could not picture a better scenario,” Carman said. “This is crazy thinking about the journey and where the game of football has taken me in my life."

Carman raised a few eyebrows when he declined to work out for NFL teams during Clemson’s Pro Day in early March. Carman, still recovering from a herniated disk, feels like he made the right decision.

“It could have been a potential whatever with the draft, but all the NFL teams knew about it and it was very obvious that my health was progressing well,” Carman said.

He started all 12 games at left tackle in 2020, playing 793 snaps as Clemson led the ACC as the only team to allow fewer than two sacks per game. Carman was a second-team All-American according to CBS Sports, and he said he felt like his game film speaks for itself.

“Me and my support team and the people around me just really felt like I had a good season and that I was ready, not only physically, for the NFL but just mentally and maturity-wise,” Carman said. “This was a great opportunity for me and a challenge that I’ve been dreaming of since literally a little kid. So, just the opportunity that I have right now to just be able to go chase my dreams and do it at full speed is something I’m excited and ready for.

“As far as this past season, I felt like I had a great season. It was definitely a special season just considering everything that we went through as a team, and really just being able to grow through all the adversity. And my play, I felt like was a bright spot for me. I felt like I played well, and honestly, I just wish that we could have finished together all the way to the end. I felt like we had the capability to do that, and that was probably the only lowlight for me for the season.”

Clemson head coach Dabo Swinney thinks the Bengals got a first-round talent in the second round.

“The Bengals are getting a first-round talent. Like Tee Higgins last year, Higgins went in the second round, but he was a top-15 talent and I think you saw that in how he played," Swinney said. "Higgins was a ready-to-go guy right out of the gate with his best football still in front of him and he left early right after his junior year, and I would say the same exact thing about Jackson. We have had him here for two-and-a-half years and Jackson is a ‘day one’ guy. He is going to play day one; he is not a guy who is going to redshirt. He is ready to play and that is because you can’t find what he has.

“It is hard to find offensive linemen, first of all, but especially offensive linemen that are incredibly athletic, big, strong, and can play literally four positions—and more importantly has the knowledge to play four positions. He just gets it. He understands football. So wherever he went, his team was going to get a first-round talent. I think if he had been back, he would have been a top-15 pick. I think he is one of those guys that has a chance to play a long time, and if his body holds up, I think he’ll decide when football ends for him—he has got that type of upside to him. So I’m super excited about his future and excited for the team that gets him because I know how hard it is to find ready offensive linemen and that’s what you get with Jackson Carman. You get a guy that is ready to make you better the day he steps on the field.”