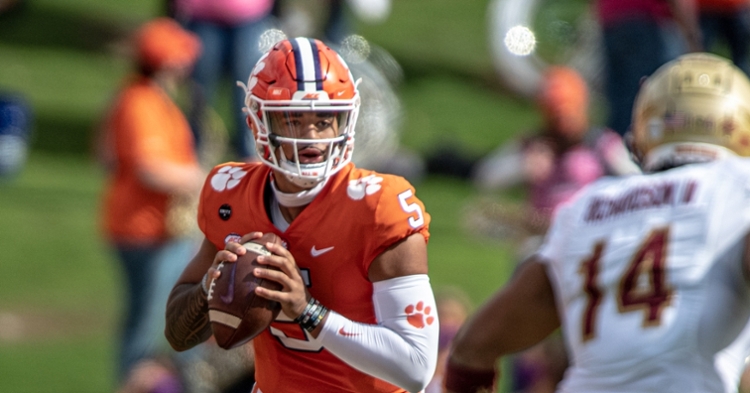 Uiagalelei is set to be Clemson's starter this fall.

The recruitment of DJ Uiagalelei and his eventual commitment to Clemson is proof that you never who’s watching what you do and say, and you never know when what you do today will pay dividends down the road.

Uiagalelei garnered his first Power 5 offer when he was in the sixth grade and had a half dozen offers before he ever took a snap in high school. He wasn’t offered by Clemson until he showed up for Dabo Swinney’s high school camp the summer before his junior year, and nine months later on a recruiting visit with his family, he gave his verbal commitment to the Tigers.

Uiagalelei’s head coach at St. John Bosco (Jason Negro) in Bellflower (CA) has seen a lot of his players go the route of Power 5 football but had never had much contact with the Clemson coaches. However, Uiagalelei has said that he watched Swinney and the Clemson program from afar, and he was waiting for contact or an offer. When that didn’t come, he took things into his own hands.

‘You know what's funny is they were recruiting another one of our players, and it just was an ironic situation,” Negro told TigerNet. “I was taking DJ home one day. And we're driving in the car, and he had just gotten like an LSU offer or Alabama or something like that. I'm like, ‘Man, you got every offer in the country.’ He goes, ‘Well, not all of them.’ And I'm like, ‘Well, okay, who out there is somebody that you'd be interested in and that you would want to go to?’ And he says, ‘Clemson.’ I go, ‘Clemson?’ And he's like, ‘Yeah.’ And I said, ‘Huh. Well let's give them a call. Let's reach out to them and see what we can do about getting you to go there.’ I go, ‘That would be something you would consider, going to South Carolina?’

"And he said, ‘Oh, absolutely. I just love that program. I like what Coach Swinney does every time I've heard him speak. It just kind of really sounds like a place I'd like to play.’ And I said, ‘Okay, interesting.’”

Venables had reached out Negro about a defensive player on the Bosco roster, and Negro told Venables about Uiagalelei’s interest.

“Well, just incredibly the very next day, I get a phone call from Brent Venables who was recruiting one of our linebackers,” Negro said. “And so I'm talking to Brent Venables about the linebacker and back and forth and talking because the kid was going to go out there and visit Clemson. So, at the very end of the conversation, I said, ‘Hey, listen. Who recruits your quarterbacks?’ And he said, ‘Brandon Streeter.’ And I said, ‘Okay, well, listen, I got a guy that's in my program. And I think you guys need to really take a look at him. He played through his sophomore year. I mean, he's going to be a junior. I want you to take a look at his film.’

"And he goes, ‘Okay. Why don't you send me his film? And I'll pass it on to Coach Streeter.’...And I thought, 'Okay, I'll give it a couple of days, and then I'll call back.’ I got a call an hour later from Brandon, and he says, ‘Hey, Coach, I need to talk to you about this quarterback. Who is this kid?’”

That kid was Uiagalelei, who later visited the campus and received his offer.

“And that's how it started. And that's when Terry (Bullock) brought those guys out there because Coach Swinney wouldn't offer a quarterback unless he actually saw him throw live,” Negro said. “And we're like, ‘Okay, well we'll get him to your camp. We'll let you see him.’ And the rest is history, and we've had developed a pretty good relationship from there.”