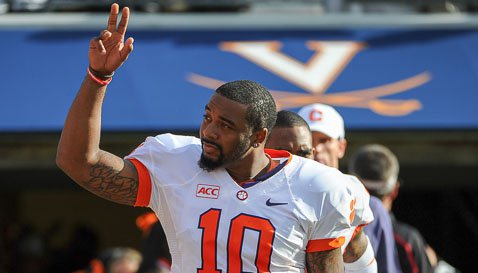 Dabo Swinney
Head Coach
View Full Profile ’s first recruiting class as a head coach will run down the hill in Death Valley for the last time Saturday, moments before the Tigers take on The Citadel at noon.

Tiger fans have heard the small, tight knit group of seniors speak increasingly about their final moments at Clemson as the season has gone on. This week a few of those players shared some extra words on their experience under Coach Swinney’s direction.

Each player seemed to echo the same sentiments, describing Saturday as a poignant time in their respective Clemson careers.

Martin Jenkins
RS Jr. Cornerback
#14 5-10, 180
Roswell, GA
View Full Profile , said, “It’s definitely a bittersweet feeling, just knowing it’s going to be my last game here in Death Valley. Like I said, I just understand there’s stages you have to go through in your life and this is one of them.”

He continued, “I just like to tell the guys who are younger than me to enjoy it and really embrace it.”

Looking after the up-and-coming players has been a priority for this senior class, who has rarely seen trouble off the field.

Tyler Shatley
Gr. Offensive Guard
#62 6-3, 295
Icard, NC
View Full Profile commented that being at Clemson gives the players a great sense of family, making it feel easy to look after one another.

“We all look out for each other. When you’ve got great friends like we do and everyone’s such a family you don’t need to be out on weekends looking for trouble. We can all hang out with each other and we all have each other’s backs. We hold each other accountable, so that just goes to show how we like to run things around here,” he said.

Perhaps all of these seniors feel especially connected after each took a leap of faith by joining the team with Swinney as an unproven head coach. Swinney has never been shy about his expectations for success or his emphasis on committing 100 percent. This senior class was “all in” from the beginning.

“It was a small class and our guys had a good relationship with each other. We didn’t know what Coach Swinney had in store, and he got the job done so far,” said Quandon Christian

Quandon Christian
RS Sr. Linebacker
#34 6-2, 225
Lake View, SC
View Full Profile . “He just kept telling us to hold on and everything would be fine and to just stick with Clemson. And that we’re going to make it to the top someday.”

Chandler Catanzaro
Gr. Punter / Kicker
#39 6-2, 195
Greenville, SC
View Full Profile rose through the ranks from walk-on to record-breaker during his time on the team. Coaches and the Clemson faithful now look for automatic points whenever Catanzaro takes the field. The veteran kicked a career-long, 51-yard field goal against Georgia Tech during the last game, which is proof of his growth over the years.

“That’s what you want as a kicker,” said Catanzaro. “When you run out there, the crowd, everybody, your team – they know it’s points.”

He also had positive words about rising kicker Ammon Lakip

Ammon Lakip
RS So. Kicker
#36 5-10, 185
Alpharetta, GA
View Full Profile . Catanzaro believes the sophomore is a hard worker who will turn into a great player for the team.

Tajh Boyd
RS Sr. Quarterback
#10 6-1, 225
Hampton, VA
View Full Profile spoke candidly during Monday’s interviews about his time at Clemson. The ACC leader discussed his second-thoughts about becoming a Tiger as he was a redshirt freshman, but also said that year of his life ultimately made him a stronger player who grew under and learned from players like Andre Branch

“We still keep in frequent contact every day. These relationships are more than just here at Clemson, and they’ll continue forever,” Boyd said.

Though emotions will be running high Saturday, the seniors expect to be all smiles when they see the scoreboard.

“We’re still looking for that game where we can break every record as we can as an offense. And you know, we still have opportunities this season so we’re trying to make the most out of every game we have,” Boyd said.