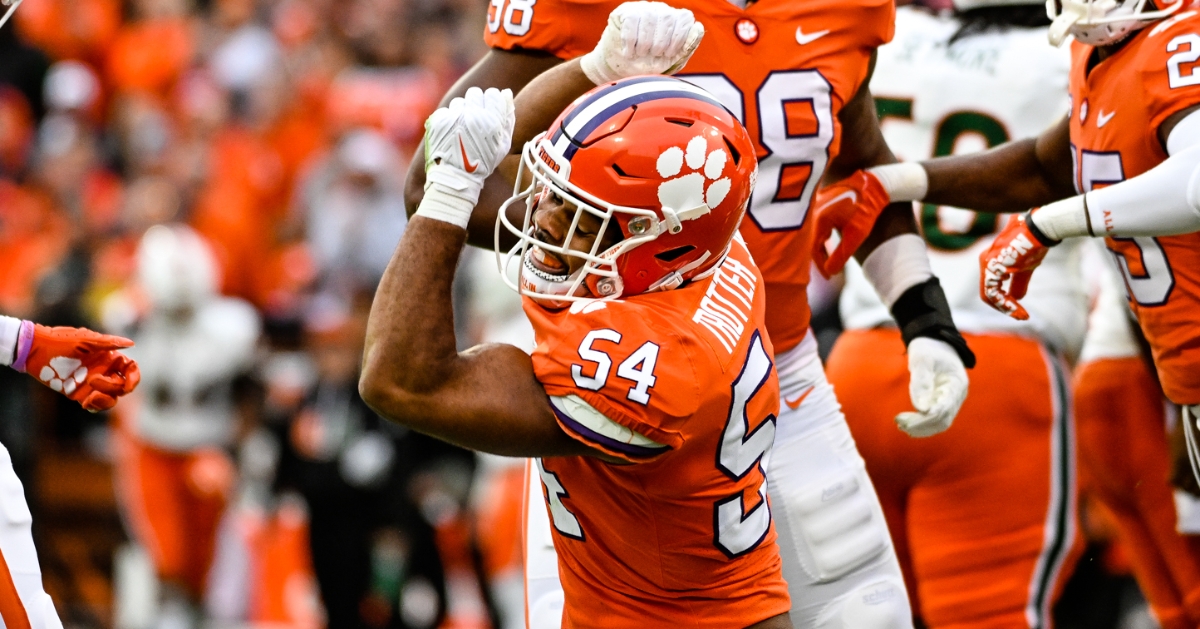 Jeremiah Trotter had plenty to celebrate in Saturday's win and now it's on to South Carolina.

CLEMSON – Jeremiah Trotter didn’t grow up around the rivalry between Clemson and South Carolina and didn’t understand the level of acrimony between the two fan bases. Until last year, when he walked out of the tunnel at Williams-Brice Stadium and heard the names being called, and dodged the debris.

Clemson plays host to South Carolina Saturday at Noon in Death Valley. The Tigers have won seven in a row in the series, and if you go back to 1997, Clemson has won 17 out of the last 25. That number is incredible when you consider that the Gamecocks won five in a row at one point.

South Carolina defeated Tennessee 63-38 Saturday night at home, while Clemson dispatched Miami 40-10 in Death Valley. In the aftermath of the win over the Hurricanes, Clemson players were already talking about the Gamecocks.

“Rivalry week means a lot to me. This is a big one for Clemson fans,” Trotter said. “Last year, I think we played them very well and came out with the W. We plan on doing that again. This is definitely a big week. As Coach Swinney says, this is a season on its own when it comes to playing South Carolina so we're just going to come with the right mindset, work hard, have great preparation and try to be dominant on Saturday.”

Trotter said it took playing in the game to understand what it means.

“My first game my freshman year going to their home stadium and seeing how their fans acted and how they treated us walking out of the tunnel. Going out onto the field, I could definitely sense that there was some bad blood between both teams,” he said with a smile.

Safety Jalyn Phillips said anything can happen in a rivalry game.

“South Carolina, that's a season of its own. It's one of the biggest rivalries in the country, so we're definitely going to prepare with a purpose for them,” Phillips said. “My mindset is it's just another game and they're in the way of what we're trying to accomplish. It's always having that windshield mentality and focusing on what's next. We know we're going to have prepare well no matter what the record is. Rivalry games are crazy and it doesn't matter what team is undefeated or anything like that. We know we're going to have to prepare with purpose. They're a good team. We're going to attack the week like any other week.”

Tight end Luke Price, who caught his first career touchdown Saturday, grew up in South Carolina, and his older brother Philip played for the Tigers, so he knows what the game means to South Carolinians.

“I'm from South Carolina, so personally, it means a lot to me. It means a lot every year because, for whatever reason, they don't like us,” Price said. “For us, it's our last game. More importantly, it's 41 at home next week for a chance to have that, which is even more special. It's eight in a row to go against South Carolina if we can win next week, which is monumental. At the end of the day, it's doing your job and playing to win, playing for each other. Being from the state, it just means a little bit more.”

Price then showed his passion when talking about giving his all for this one game.

“It's a great rivalry. It's the second oldest rivalry in college football, so there's a lot of history and a lot of passion,” Price said. “It's two teams from the same state who have always wanted to be the best in the state. Coach has always said it's a season of its own, so you've got to embody that mindset. It's a one-game season, a one-game mentality, and you've got to give everything you have for the program, for the win, for the state. Whether you're a South Carolina or Clemson fan, they want their team to win, and that has more of an impact on some people that other things in their lives. It's great to have an opportunity to do that and have an impact on people whenever you do win.”